Adaptation and Inheritance are the two books that make up a Young Adult sci-fi duology by Malinda Lo.  Adaptation is a stronger book than Inheritance, as it sets up a possible government conspiracy, with aliens, by using creepy imagery in a unique way.  Inheritance is supposed to be the payoff book, but it fails to satisfy because the characters never become very proactive.  But both books are interesting in their portrayal of a teen who is struggling to resolve a love triangle between herself, another girl, and a boy.  The gender issues are well done, but they need a stronger story to fit into.

Adaptation starts off with two teenagers, Reese and David, trying to get home from a debate tournament.  Their plane is grounded because planes all across the country are crashing, apparently due to large flocks of birds flying into the engines.  Reese and David and their coach try to drive home, but they face an increasingly dystopian, terrifying landscape, with tanks blocking exits and forcing them to take multi-hour detours.  Ultimately, there is a car crash, and Resse wakes up in strange hospital in Nevada, with scars that seem to heal almost instantly, strange new mental powers, and no memory of what she’s told has been several weeks in the hospital.

Inheritance picks up precisely where the last sentence of Adaptation leaves off.  I won’t discuss the plot much, because it’s all a spoiler for Adaptation.  David and Reese continue to try to deal with their new powers as well as the conspiracies that surround them.  They also have to deal with their relationship, which is complicated by the fact that Reese loves David but also falls in love with a mysterious teen she meets at home in San Francisco, named Amber.

The strength of the first book is in its creation of an atmosphere of dread.  Reese’s realization that the airport is running out of food, the tanks that line the highways, and the horrifying stop for gas are masterfully done.  The fact that all this is triggered by birds that seem to fall from the sky adds a surreal, creepy element.  The hospital scenes add body horror and paranoia.

Unfortunately, after Reese leaves the hospital, the story dials back down and never regains that urgent, visceral sense of creepiness.  No one seems terribly upset about martial law.  There’s no apocalypse, just earlier bedtimes.  Even in the second book, nothing seems terribly urgent.  Important, but not urgent.  You don’t get a sense of deadlines, or of high stakes.  It seems like whatever happens, Reese and Amber and David will continue hanging out and being angsty and going to school etc.  Towards the end of the second book, there’s an attempted rape that is clearly supposed to fill the reader with terror and disgust, but it’s a terribly clichéd and ham-handed attempt to convey our heroes’ helplessness.  In my view, that was so profoundly communicated by Reese’s earlier mandatory hospital exam (one in which she is forced to strip with no sexual text or subtext) that I lost all remaining interest in the story. 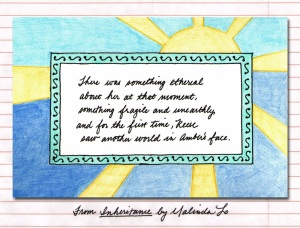 Where the story shines in being uncompromisingly, unapologetically positive in its depictions of characters who are variously multi-cultural, multi-racial, gay, straight, bisexual, and polyamorous.  Reese’s confusion about her relationship with Amber and her reluctance to identify as bisexual is realistically portrayed.  This is also a rare case in which a polyamorous relationship is discussed in positive terms.  Reese attempts to be ethical and honest with Amber and with David, although sometimes it’s hard for her to be honest with herself.

The problem with the romance angle is that, as well-intentioned and refreshing as it is, there’s nothing to convince the reader that either Amber or David would actually want to be with Reese.  She’s nice enough, but she’s an unrelentingly bland character, which is especially problematic given that she is the book’s first person narrator.  Reese is the ultimate Mary Sue – she has no flaws other than being boring, and everything and everyone revolves around keeping her safe and happy even when the people trying to do so are in as much danger as she is.

The final problem with the series with that Reese never takes charge of her own story.  It’s perfectly realitic that a teenaged girl would not be able to act decisively and effectively against a government and alien conspiracy, but it’s not much fun to read about someone shuffling around helplessly for two books.  Every now and then Reese makes a grand gesture, but the gesture involved telling everyone everything she knows, and then going back to her room while the major players return to taking control of the narrative.

I thought the first half of Adaptation was remarkable in it’s depiction of surreal violence and paranoia, and I loved seeing the positive portrayal of LGBT characters.  But ultimately this duology lacks punch.

Scarlet is Book Two of the Lunar Chronicles Series.  This series, while not strictly a romance series, is a high-quality romance-friendly crossover, and its inventive steampunk/science fiction twists on fairy tales make it a must-read for genre fans.  I enjoyed the world-building and the twists on fairy tales.  I do recommend that readers read the first book, Cinder, before reading Scarlet.  Cinder is the book that sets events in motion, and frankly, I think is a stronger book overall, although both books are compelling.  For a full length review of Scarlet, check me out at Smart Bitches, Trashy Books.