I sure do love a book that leaves me saying, “Holy crap, what just happened? Did that really happen?” The comic book series The Wicked + the Divine by Kieron Gillen and Jamie McKelvie is full of such moments, none more than in Issue #11 which was so WTF that I had to rummage around online to make sure that I actually read what I read (I did).

The premise of The Wicked + the Divine is that every ninety years a pantheon of twelve gods is reborn. The gods have great fame and great powers but are fated to die within two years of being granted godhood (before that they are humans with no knowledge of what lies ahead). Each god is recognized and deified (by an immortal, Ananke) with these words:

You are of the Pantheon.

You will be loved.

You will be hated.

You will be brilliant.

Within two years you will be dead.

The first two volumes (Issues #1 – #11) involve a human, Laura, who becomes friends with Lucifer (modeled on David Bowie’s Thin White Duke Persona). Laura tries to solve a mystery that involves Lucifer and in doing so she becomes part of the Pantheon’s world. Laura longs to become one of the gods even though her life would be short – she’s a very frustrating character in her endless obsessions and her angst, which seems at odds with her supportive family life but which is also in keeping her with her being a lonely teenager.

The gods are massive celebrities, literal and figurative rock and pop stars. The book is a commentary on mortality (the author was inspired to write the series by his father’s diagnosis with terminal cancer). But it’s also a commentary on how we worship, hate, and discard our celebrities. Of course in reading the series, the reader becomes another level in this examination of how we consume people we think are glorious and beautiful and how their deaths add to their fascination. The comic book characters are fictional, but the reader’s process is much the same as the rock star fan’s process – the characters entice us because they are beautiful and gifted, and the tension of the comic comes from the fact that most of the characters are fated to live no more than two years from the time the story begins. 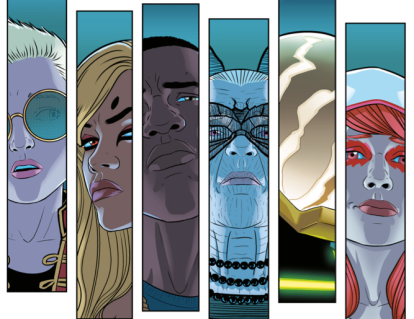 In her insightful essay, “The Assassination of Cordelia Chase,” Jennifer Crusie points out that readers “want to be surprised; they don’t want to be betrayed,” and that “The choice between honoring character to show growth and mutilating character to serve plot spells the difference between the delighted reaction, ‘I can’t believe she did that!” and the betrayed protest, “I don’t believe she’d do that.’” W+D is full of moments that are insane and yet don’t feel like a betrayal. You don’t see these moments coming, particularly the end of Issue #11. But after it happens, there’s a sense that all along this moment was inevitable.

The coloring and lettering of the comic is brilliant. Everything you need to know about Laura’s fascinating with the Pantheon can be seen in the contrast between the coloring of the everyday world and the coloring of scenes that include a deity. The comic includes male, female, transgender, and gender queer characters, including several who are bisexual. Many of the characters, including Laura, are people of color (a running theme is that Ameratsu was previously a Caucasian girl named Hazel and that therefore she is committing cultural appropriation by assuming the identity of a Japanese Deity).

This is a dark comic, not a happy romp, definitely for older teens and adults. However, it is incredibly textured and original and compelling. I have no idea where it’s going but it’s an exciting and chaotic ride.