This was not the greatest episode of Arrow, but not the worst either – this is another one where things get slotted into place.  The short version recap is that Laurel tries to out Sebastian Blood as a bad guy, but no one, including Arrow, believes her, especially when Blood tips off the cops that there are a bunch of drugs in Laurel’s apartment.  Then one of Blood’s minions tries to kill Laurel.  If you were going to try to kill her, why bother with the drugs?  I thought the beauty of the drug thing was that it got Laurel out of the picture without doing anything other than revealing a secret Laurel really did have.  Laurel is a wreck, she’s fired – it’s basically another episode of “Kick the Laurel”.  For the love of all that is holy, could someone please get this woman a basket of kittens.  It’s an emergency.

Back on the island, Sara reveals that Laurel new Sara had a crush on Ollie and set her up to be grounded so Laurel could make her moves.  See, this is why my dear daughter should be grateful to be an only child.  Sara has a chat with Ivo and throws in her lot with Ollie (maybe).

Roy has issues because of the serum he was injected with and Sin spends the whole episode being awesome and trying to get him to tell Thea what’s going on, but he doesn’t, because Roy is a moron.  And now Arrow has a protegé!  Whee!

No major romance developments except that Ollie has “a blind spot” when it comes to Laurel and despite the fact that Thea has suddenly become the most mature person on the show, Roy continues to keep her in the dark.  No one likes a pouter, Roy.

Bizarre tech of the night:

Felicity doing a lie detector test on a guy remotely…how?  I dunno.  It’s being done by Felicity, so I’ll accept it.

Best Lines of the night:

Felicity finally says what we’ve all been thinking:  “Well, his last name’s ‘Blood’.  That can’t be a good sign.”

Sin:  “Good thing Thea and I are tight”.  Friendship between women!  I am now officially logging my request for a Thea/Sin spin-off show.  Sin proceeds to rock the entire episode, from her face as Thea leads her to find a “first date outfit” to her response to a john who says, “You’re pretty”  (Sin:  “You’re disgusting”).  Sin, NEVER CHANGE. 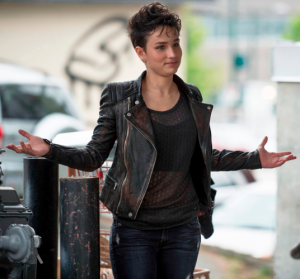