And now for something completely different…a video that includes me!  I gave this presentation, “The War that Launched a Genre: WWI and the Birth of Modern Fantasy” at Sacramento Public Library.  I had a great time, and you can tell that I thought the topic was “really interesting” because I seem to have said so about once every five minutes. The presentation includes discussion of “The Battle of Dorking”, H.G. Wells, Charlotte Perkins Gilman, modernism, C.S. Lewis, and, of course, Tolkien.

Warning: it’s long, and if you take a drink every time I say “really interesting” you’ll be unconscious in the first thirty minutes.

It’s been a while since we had an edition of Gateway Drugs over here on Geek Girl In Love.  This is the feature where we talk about what books you would recommend to someone who wants to try out a genre for the first time.  Today’s feature is on Fantasy.  Hop on the comments, or on Facebook or Twitter, and tell us what got you into fantasy, or what you’d recommend to someone who was trying out Fantasy for the very first time.

Here’s my pics for some things to try.  Let’s start with some obvious categories:

The Ultimate Fantasy Classic:  The Lord of the Rings, by J.R.R. Tolkien

Please.  Like I’m not going to suggest Lord of the Rings.  Everyone reads Lord of the Rings.  start with the Hobbit, but be aware that it was written for a younger audience.  Frankly, I prefer the Hobbit.  I enjoy the simplicity of the storytelling.  But for the real stuff, you have to read the trilogy that follows.  By the way, to my complete astonishment, I loved the Peter Jackson film adaptation for LotR, although I was less thrilled by the first Hobbit movie.

It’s For Kids, but not Really:  C.S. Lewis, Phillip Pullman, and J.K. Rowling

This category also applies to The Hobbit.  Some of the most popular fantasy has kids as characters, and is marketed as being for kids, but has themes that attract adults.  The Chronicles of Narnia, by C.S. Lewis, is of course incredibly important to the genre.  This series has strong Christian undertones which, as a child, bothered me not a whit.  Even as an adult, I’d argue that the only book in the series in which the Christian Allegory becomes obvious and invasive is in the last book in the series, The Last Battle.  I loathe The Last Battle and my ten-year old consultant agrees with me.  But the other books in the series are wonderful.

More recently, Phillip Pullman came out with the series His Dark Materials.  This series, which starts with The Golden Compass, tends to end up on children’s shelves, but I’d argue that it’s much more for teens and adults as the material is both intense in terms of violence and intense in terms of complicated themes.  Phillip Pullman is an atheist and just as Christian allegory shows up  in the Narnia books, there’s a lot of atheist allegory in the His Dark Materials Book – but not enough to be oppressive or mess up the story in a heavy-handed way.

And of course, let us not forget Harry Potter, by J.K. Rowling.  J.K. Rowling released about one book a year for seven years, with the expectation that her audience would grow up with the books.  As a result, the first book feels very much like a book for kids age 8-10 but the last book deals with much darker stuff.  Anyone who says “The Harry Potter Books are for kids” clearly hasn’t read Book 7.

Not for Kids, Nope, Not At All:  Game of Thrones by George R.R. Martin

Disclaimer:  I tried to read Game of Thrones.  I really did.  But I had been spoiled so I read the first chapter about Ned Stark’s happy family and became so horribly depressed that I gave it up.  The Game of Thrones phenomenon is huge thanks to the HBO series.  Game of Thrones took epic fantasy and made it gritty, realistic, and political.  Expect lots of violence, lots of sex, and lots of scheming.

OK, that’s the basics.  But what are some less obvious fantasy choices for a newcomer?  Here’s a handful of titles that are marketed for adults and which have attracted a lot of attention both within and without the genre community:

This is a modern fantasy, in which a man, Shadow, becomes involved in the lives of the Gods that people brought to America with them when they emigrated.  The book is famous for its clever and poetical premise, its attachment to the American landscape, and its language, which is beautiful but modern, unlike the ornate language of most high fantasy.

War for the Oaks, by Emma Bull

This is one of my favorite books, ever.  One of the first urban fantasy books, it tells the story of rock musician Edie who becomes involved in the Faerie Wars.  The sense of day-to-day life and the sense of magic and magical creatures are equally vivid.  This book also features one of my favorite romances.  It’s exciting and funny and scary and exhilarating.  You can find my full-length review of this novel at Smart Bitches, Trashy Books.

Throne of the Crescent Moon, by Saladin Ahmed

Fantasy has a reputation of being by and about white people by Saladin Ahmed removes fantasy from the realm of European mythology and sets his story in a fantastical version of the Middle East.   Great characters, great world-building, great plot.  you can find my full-length review here on Geek girl In Love.

What got you into fantasy, and what would you suggest to a friend? 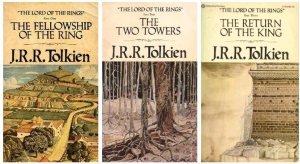