This month the Between the Lines Book Club is reading The Wright Brothers, by David McCullough. You can leave comments about the book here, or better yet meet up in person at Arden Dimick Library  at 10:30AM on Saturday, July 30, 2016.

Here’s some amazing footage of the Wright Brothers in action! It includes still photography, film footage of both brothers, film footage of the flights in Le Mans and Fort Meyer, and the first motion picture footage shot from an airplane. It also shows how the catapult system got the plane into the air. Enjoy!

This month the Between the Lines Book Club is reading The Wright Brothers, by David McCullough. You can leave comments about the book here, or better yet meet up in person at Arden Dimick Library  at 10:30AM on Saturday, July 30, 2016.

David McCullogh is a highly acclaimed author who has won two Pulitzer Prizes (for Truman and for John Adams) and a National Book Award (for The Path Between the Seas). He was born in Pennsylvania in 1933, and studied at Yale where Thornton Wilder became his mentor. He met his wife, Rosalee, when he was seventeen. They have five children and currently live in Boston.

McCullogh’s first book was The Jonestown Flood. Although he was approached to write about other disasters, he didn’t want to be labeled “Bad News McCullough” so he turned to a more cheery story, the building of the Brooklyn Bridge. He is probably best well known for John Adams and for 1776.

McCullough did a number of interviews about The Wright Brothers. Here are links to a few:

And here’s a lengthy interview with McCullough and Ken Burns. McCullough narrated several of Burn’s documentaries.

Announcing our July Book Club selection: The Wright Brothers, by David McCullough! We will be meeting in person at Arden Dimick Library in Sacramento, CA, at 10:30AM on July 30, 2016 to discuss the book in person, and we’ll also discuss it right here every Friday in July.

The Wright Brothers is a non-fiction book that describes how the Wright Brothers and their sister, Katherine, built the first heavier than air, manned, flying machine. David McCullough is something of a celebrity in the world of biographies: he won the Pulitzer Prize for Truman and another of John Adams. He’s also the recipient of the Presidential Medal of Freedom. He’s written eleven books and narrated many films and documentaries.

If you live in the Sacramento area, you can get a copy of The Wright Brothers at Arden Dimick Library’s circulation desk – just tell them it’s for book club! 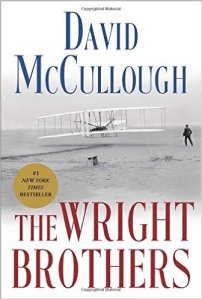