Oh, Richard Dawkins.  For such a genius (and I’m not being sarcastic – he’s an incredibly intelligent and influential writer on the topic of evolution and on the topic of atheism) he sure has been missing the point lately.

Dawkins said this earlier this week, which I’m reprinting from NPR:

“Just as we don’t look back at the 18th and 19th centuries and condemn people for racism in the same way as we would condemn a modern person for racism, I look back a few decades to my childhood and see things like caning, like mild pedophilia, and can’t find it in me to condemn it by the same standards as I or anyone would today.” He goes on to state that as a prep student, he and others had been groped by a teacher, but says, “I don’t think he did any of us any lasting damage.”

I’ll give you all minute to digest that.  When you are done ripping out your hair and screaming, ponder this – in May, Dawkins infuriated lots of people by mocking a woman who complained (rather mildly) about being propositioned in an elevator at a Skeptics conference.  This woman, Rebecca Watson, didn’t accuse her propositioned of being a predator or anything, she just pointed out that maybe 4AM in an elevator is not the right place or time to ask a woman to come up to your room if you want her to feel comfortable.  Her comments were mild and brief but somehow this escalated into an Internet discussion that left smoking keyboards all across the land, and Dawkins remained, to the end, convinced that there was no problem – that Rebecca Watson had no reason to feel uncomfortable and if she did it was her choice.  You can read more about that ugly exchange, including Dawkins’ infamous “Dear Muslima” comment, here, and you can read Rebecca Watson’s response to the controversy here.

Particularly in the child abuse quote, there are so many offensive things being said at once that each deserves its own blog post.  But since I’m confident that thousands of people are frantically typing their own essays about the problem with the phrase, “mild pedophilia”, I’m going to focus on another problem – why is Dawkins so dismissive about instances where people’s boundaries are violated?  Or, as Deanna Troi might put it:

For once, Troi says it better.  I tried to find a picture without the “F” word in it that would convey my sentiments, but sometimes the “F” word just really, really applies.

The common thread Dawkins seems to follow is that if something does no “lasting damage”, then it’s not worthy of much concern or condemnation.  I’m pretty skeptical about his claim that his schoolmates who were sexually and physically abused didn’t experience “lasting damage”.  But just for the sake of argument, let’s pretend (OK, I’ll use a less loaded word – let’s assume) that Dawkins is correct.  Does that mean that we should accept some violations of our physical boundaries?  Allow Worf to speak for us all: 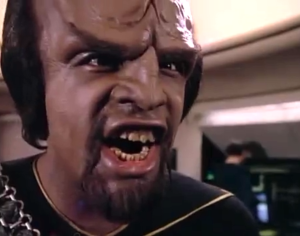 I think what he’s trying to say is…”No.”

Well, no, we shouldn’t.  If nothing else, we shouldn’t ignore “mild” violations, because they contribute to a culture in which violating the body of another is acceptable in any form.

I understand Dawkins’ point that not every violation has the same impact on a person.  If someone grabs my butt at a science fiction convention, is that the same as being dragged off a bus and raped to death in the street?  No, of course not.  But both things are made possible by the same belief:  the belief that the body of someone who is less powerful than you is yours to use for your own ends.

That’s why it’s important that women be treated with respect at conventions (there are, of course, other reasons, but this is the core reason that I think best addresses Dawkins’ concerns).  It’s not that we’re so stupid that we can’t see that being grabbed is less traumatic than being raped – it’s that we DO see that both groping and raping are pieces of the same puzzle.  The reason Rebecca Watson felt uncomfortable in the elevator is that women know that we live in a culture where we have to constantly defend our bodies from everything from mild indignities to government inference to murder.  In defending my right to go out in public without being harassed, I am also defending my right to live without being raped, beaten, or killed – I am saying that my body is mine, and must not be violated, not even a little bit.

If people, be they women, children, or men, are to be able to live their lives with safety and dignity, then there have to be legal and social consequences to those who violate the physical boundaries of others.  Although there are legal protections for rape victims, social condemnation hasn’t caught up – witness how many times rape victims are blamed for the rape (they were wearing the wrong thing, they were in the wrong place, etc).  We have stronger social sanctions against those who molest children partly because the violation of trust is greater.  There’s a sense that a woman should know that she can’t trust a stranger in an elevator (and isn’t that sad, and so unfair to the vast majority of men who are NOT predators), but a child should be able to trust adults, especially adults that the child has been specifically told to trust and is completely dependent upon (parents, babysitters, relatives, teachers).

If Dawkins survived his childhood unscathed, then I’m happy for him.  But our world is, well, scathed, because of what happened to him and his classmates.  Our world is lesser, and we are all less safe, not because those specific teachers are lurking in our closets, but because because the idea that you can use the body of another person to satisfy your own whims lurks in our culture and in other cultures throughout the world.  So yeah – I do condemn people who grope children, and I do condemn people who harass women, and I do condemn rapists and murderers.  My body is mine, my daughter’s is hers, and Dawkins’ is his.  And that’s important. 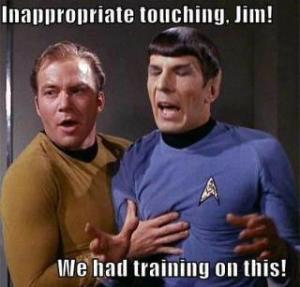 Thank you to the cast of Star Trek for helping me out here.  As a new blogger, I’m still figuring out when it is and isn’t acceptable to use images posted online by others – if you click on the photos and go to “description”,  you can see where the photos come from.