Today we have an interview with author Christine D’Abo.  Her book, Quicksilver Soul sounds like my kind of crack and it’s on the very top of my increasingly terrifying “to be read” pile.  This is the second book in Christine’s “Shadow Guild” steampunk series.  Here’s are Q&A with Christine:

While Quicksilver Soul is a standalone novel, there is some important world building that I setup in book one. That said, as long as the reader goes into the book knowing that it’s an alternative historical setting where all is not as it seems, they should be fine. Nicola and Emmet’s story and romance are self-contained in this book and will leave the reader satisfied. 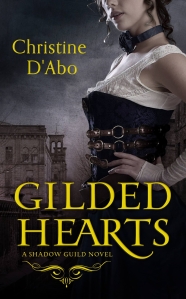 2. Why do you think steampunk is so popular at this moment in time?

Oh that’s a great question! I think there are a few reasons, or at least these are the things that I personally love about steampunk. I’m a big fan of historical set romances. I’ve been on the Regency bandwagon as long as I can remember. But you do get to a point when the plots can feel a bit overdone. I love the settings, the sense of propriety, but kept looking for a different angle. With steampunk set in the Victorian period (for the most part), it allows authors to explore different avenues that wouldn’t be available to them if they were writing straight historical romance.

The other thing that I believe is a big draw is the costumes. The visual aspect of the outfits, the DIY nature of the technology and how it’s integrated into every aspect of the character’s life. It takes the conventional and flips it on its head. Mixing sci-fi/paranormal elements with historical, and throw in modern sensibilities, I think that’s the appeal.

3. What draws you to writing romance?

I’ve always been a fan of stories that give us a happy ending. The world we live in is increasingly growing in tension and larger demands are being placed on all of us. When you are constantly being faced with uncertainty, it’s great to have a form of literature that you can escape into that will ensure a positive outcome.

I’m also a hopeless romantic. I met my husband when I was 14 and we’ve been together ever since. I’m a firm believer in true love and honestly feel that there is someone out there for everyone. In my worlds, it’s nice to ensure that happens every time.

4. Who are some of your favorite authors? Who are you influenced by?

There are so many authors who I love to read and who have left a major impression on me. When I was younger Stephen King, Mary Stewart and Margaret Atwood were my favorite authors to read. While they had different styles, there was something about their storytelling that made me want to write myself.

Modern authors who I find I’m big fans of (and wish I could be more like when I grow up) are Ruthie Knox, Cara McKenna, Delphine Dryden, and Mary Balogh. Their ease of storytelling, characterizations and the emotions that they layer throughout their books pull me in every time. I’m in awe of what they can do, sometimes with very short word count.

5. A giant kraken and a clockwork megalodon are in a battle for the seas. Who wins?

Beast versus machine! While I think the machine would be a formidable contender, I’d have to lean toward the giant kraken winning. Never underestimate the desire of a living creature’s desire to survive when their life is on the line.

Thanks, Christine!  Want to know more?  Here’s a plot summary and links should you wish to purchase the book: 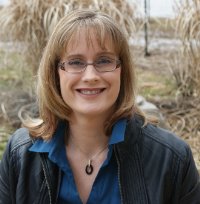 About QUICKSILVER SOUL
Nicola Tesla has never needed a man to complete her life. A gifted engineer, she has always had her experiments to keep her company-or she did, before her vile boss stole them. Now she’s working at the Archives in New London, where the memories of the dead are stored. But it isn’t long before Nicola discovers she’s being watched . . . by a most intriguing, sinfully sexy man.

Archivist Emmet Dennison should be busy extracting memories from the dead. Instead he’s been asked to keep an eye on the brazen, strikingly beautiful Nicola Tesla. Soon Emmet and Nicola are shaken by an attraction neither of them wants. Yet when a nefarious man takes them hostage, Nicola and Emmet will need to rely on their attraction, and the growing bond between them, to stop a madman hellbent on destroying New London forever.