I think this speaks for itself.  Enjoy, Game of Thrones fans.

Apparently there are only two ways to cope with another Game of Thrones season ending – one way to cope is to make parody videos, and the other is to watch them.  Here’s a few to tide you over until next season.

First of all, here’s Lena Heady giving an interview in character as Drunk Cersei.  Best line?  “You host a [bitter laugh] talk show.  How NICE”.

In case you need a catch up on who these people are, here’s a parody medley to explain it all to you:

And Wil Wheaton, not to be outdone, has his own way of explaining it all:

There’s no release date set for Season 5 but it’s rumored to be happening around March 2015, so you have plenty of time to stock up on dragon kibble and kleenex.  OK, go!

Game of Thrones is back, and there is much rejoicing all across the Internet.  In honor of this exciting moment in time, the people behind the Symphony of Science Series have brought you Game of Thrones auto-tuned – as safe for work as Game of Thrones is ever likely to get, and catchier than I ever would have expected.  Also, really kind of a rush. 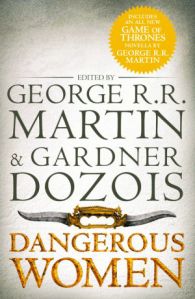 Dangerous Women is an anthology of stories about, you guessed it, women who are, in one way or another, dangerous.  The anthology is edited by George R.R. Martin and Gardner Dozois and includes a Game of Thrones novella by Martin.  I was thrilled about this book, picturing a bevy of kick-ass women of both the wits and the weapons variety.

Well, I can’t quibble with the quality of the writing in this anthology.  Every story is solidly written.  All the authors have a good use of language and world-building.  One of my favorite things about this book is that it involves a variety of genres, including science fiction, fantasy, noir, and western.

But although the technical level of the writing was very high, I was disappointed by the content.  Most of these stories weren’t particularly empowering.  Many of them were about women who use sex as a weapon.  A surprising number of the stories were narrated by men, and dealt with men’s fears about women wielding sexual power.  Those stories weren’t always bad, but for me when it comes to exploring the idea that women can use sex as a weapon against men, a little goes a long way.  Not all the stories were like that, but more than I had expected.

Although I was little disappointed in the anthology as a whole, there were several stories that I thought were remarkable.  Not only did I like the stories while I was reading them, but they stayed in my mind long afterwards.  Here’s some standouts:

My Heart is Either Broken, by Megan Abbott

This is a haunting, chilling contemporary noir about a couple whose baby is kidnapped – maybe.  This story is clearly influenced by the Casey Anthony case and it manages to infuse the story with compassion and unexpected twists.  I never felt like I knew what was coming up and I did not expect to feel the parade of emotions that I went through.  It’s a tiny gem of a short story that is a master class in how to accomplish a great deal in a short space.

This is a contemporary with a hint of fantasy/horror about a woman who has reached the age where her children want her to move into a retirement home because they fear for her safety, and she refuses to leave her house.  I wanted this story to be more fair to the woman’s adult children, especially the daughter, who comes across as a one-dimensional jerk.  But it does do a good job of allowing some of the son’s very valid concerns to show through his impatience.

The fantasy elements of the story are far less involving than the day-to-day terrors of the older woman who is running out of options.  The moment when she looks around her house and suddenly realizes that it actually is falling apart is shattering.  The descriptions of suburban mom life that she relates in flashback are spot on – I say this as a suburban mom myself.  If you read one story from this anthology, make it this one.

Lies My Mother Told Me, by Caroline Spector

This is the only story I read that made me crazy to run out and find more stories set in the same world.  Structurally it’s a little weak – it feels more like part of a larger story than as a complete short story.  It’s part of the Wild Cards universe, a literary universe shared by a ton of amazing authors who all write different stories set in the same world.  It’s inventive and funny and scary and touching.  This story involves some outrageously bizarre superhero women and how they work together to protect their families.  I loved these characters so much I wanted to bring them all home to live with me forever.  Except the bad guys, who I loathed with an appropriate (high) level of loathing.

A lovely, harrowing, somewhat hopeful tale about the importance of beauty and art in a dystopian world.

I was going to just post one video from Not Literally and then I couldn’t stop watching them and now my entire life consists of starting at Not Literally videos.  So here’s three Wednesday videos, instead of one!

first of all, here’s something for everyone who’s still recovering from the Doctor Who finale:

Hufflepuffs finally get some respect in this parody of “Born This Way” by Lady Gaga:

Just a Character I Used to Know

And this parody of “Somebody I Used to Know” by Gotye has been stuck in my head for months.  Two girls settle down for a pleasant viewing of this new “Game of Thrones” show and end up in a drunken, sobbing, heap of smeared mascara.  And they haven’t even gotten to the season with the wedding yet!