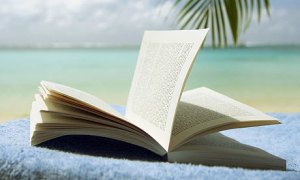 Now that we’ve lined up summer reading for the kids, it’s time for the adults to have a turn.  Here’s a handful of the best genre summer reading books.  I’m leaving off a few of my very favorites for a post on great romance books later in June – so stay tuned for that.

I feel strongly that a summer reading book must be:

I’m also fond of reading about summer during summer – until I get so hot that I have to read about Arctic exploration.  Here’s a few of my favorites:

I just started reading the final book in the series – for God’s sake, no one tell me how it ends.  This series is best known for inspiring the HBO series, True Blood.  However, although it is sexy and mysterious and frequently violent, it’s nowhere near as dark or graphic as the HBO series.  I’d say the books would be rated PG-13, occasionally veering into R, while the HBO series is more of an NC-17.  The books are light yet smart and exciting, and they involve hot days and nights, cold beer, sweet iced tea, and pretty people doing dangerous and sexy things.  Perfect for the beach.

This book takes hacking, cypberpunk, 1001 Nights, The Arab Spring, and an incredibly sweet love story, and combines these ingredients to make a modern fairy tale that feels both utterly real and completely fantastic.  Its appeal reaches beyond fans of fantasy, because it is so inventive and grounded.  It’s a book that stays in the mind long after you read it.

Evil Under the Sun, and Death on the Nile, by Agatha Christie

I don’t know what it is about summer that makes me get my Agatha on, but out of her dozens of books, these are my two favorites for a lazy summer day.  Evil Under the Sun takes place at a beach resort, and Death on the Nile involves a group of tourists in Egypt.  Both feature my favorite detective, Hercule Poirot.

Redshirts, by John Scalzi, Ready Player One, by Ernest Cline, and Libriomancer, by Jim C. Hines

I list these three together because they are both very meta (also, I read them all within a two-week period so they are permanently linked in my brain).  Redshirts tends to be filed under science fiction, although it’s more accurate to describe it as a fantasy novel about science fiction.  Ready Player One is science fiction, and Libriomancer is fantasy.

All three of these books are very much about the love fans have for their favorite things – their favorite shows (Redshirts) their favorite games and movies (Ready Player One) and books (Libriomancer).  They are love letters for geeks.  They are touching, exciting, ferociously intelligent but instantly approachable, and wildly entertaining.

You can’t go wrong with the classics (by Madeleine L’Engle, C.S. Lewis, and J.K. Rowling, respectively).  These three series were ostensibly written for children and teens, but the older one becomes the more layers appear.  I’d have to add a few other favorites to this list:  Secret Garden and A Little Princess (by Frances Hodgson Burnett), and Wind in the Willows (by Kenneth Grahame).  And it wouldn’t kill you to re-read Winnie the Pooh – a book that gets funnier every year.  I realize to my horror that some people only know Winnie the Pooh from the Disney cartoon.  If this is you, then run, do not walk, to your library and read the original, by A.A. Milne.  You’ll be amazed by the poetic wit of this lovely book.