From silent movies to today’s 3D, Dracula inspires filmmakers because its themes continue to resonate with modern viewers, and because it is full of vivid, iconic imagery.  What filmmaker wouldn’t want to film the scene of Dracula crawling down the castle wall, face first?  Or the scene in which Van Helsing and Mina Harker take refuge in a circle made of crumbled holy communion wafers as Dracula’s brides  attempt to lure them into the open?  Or Vampire Lucy wandering the graveyard in her wedding/burial dress, clutching a child (dinner) to her lovely bosom?  The novel is perfect for the movies.

It probably doesn’t hurt that the basic story of Dracula provides a good excuse for a filmmaker to sell gore, sex, and mayhem. 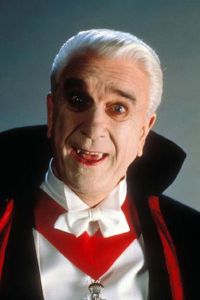 And, in a perfect circle of longevity, every time filmmakers release another movie version of Dracula, more movie goers become interested in the book – and as their interest grows, so does the studios interest in making more movies grow.  That’s not even counting all the vampire movies more loosely inspired by Dracula (Interview with a Vampire, Lost Boys, Near Dark, The Hunger, Blade, etc.) 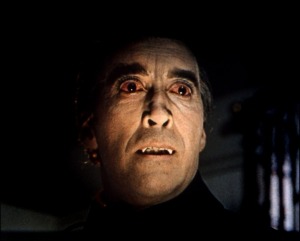 Christopher Lee, creeping me out.

Here’s a partial list of movies (by year of release) more or less directly based on the novel Dracula.  My source is the wonderful New Annotated Dracula, annotated by Leslie S. Klinger.  Just for the heck of it, here’s a link to a review from io9 of the latest Dracula movie, Dracula 3D.  Directed by Asia Argento, it is supposed to be bad beyond all belief!  If you are in the Sacramento area, come visit us at the Arden Dimick Branch of the Sacramento Public Library on October 27, at 2PM, for our actual, real life, face to face book club discussion.  I hereby invite you in.

1992:  Bram Stoker’s Dracula (directed by Francis Ford Coppola, it has very little in common with Bran Stoker’s version of Dracula.  I actually have seen this movie, and it’s HORRIBLE.)

2008:  The Librarian:  Curse of the Judas Chalice (starring Noah Wylie as the badass librarian)

For a more complete list, including such gems as Batman Fights Dracula, and Dracula’s Dog,  Wikipedia has a long, long list!