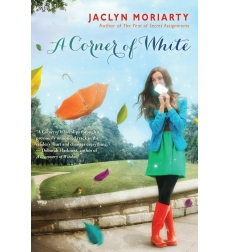 A Corner of White is a lovely story but it took me a long time to realize how powerful it is.  I spent much of the book thinking it was sort of cute and whimsical and wouldn’t you know it, it turned out to be about powerful stuff.  This is the kind of “coming of age story” that gives “coming of age story” a good name.

This book has two protagonists who live in parallel worlds.  Elliot lives in the Kingdom of Cello.  The people of Cello are under attack periodically by Colours.  Elliot’s father disappeared a year ago, and Elliot believes that his father was taken by Purples, despite increasing evidence that his father ran away with a teacher.  Elliot wants to go search for his father, but a series of events conspires to keep him in town, and meanwhile it seems more and more likely that Elliot is going to have to face up to hard truths about his Dad.

Meanwhile in our own, modern world, fourteen-year-old Madeline is adjusting to a new life.  Madeline used to run away from home a lot.  On her final try, her mom comes with her.  Now they live in Cambridge, and Madeline’s mom seems increasingly disconnected and strange.  Madeline may seem to be the person with the common sense, but Madeline’s story of how she misses her life as a rich girl with friends and a father doesn’t make sense either.  If Madeline’s Dad is so great, why was she always running away, and why did her mom come, and why did her old friends have names like “Tinsel”?

Madeline and Elliot exchange letters through a “crack”.  They are not each other’s primary relationship, but they comment on each other’s lives in illuminating ways.  As Madeline puts it towards the end of the book:

It’s like we’re complementary colors…You know what those are, right?  Colours that make each other disappear? So, if you cross red with green – or blue with orange, or yellow with purple – you get a pale, pale color, almost white. (Issac called it a “faint, anonymous color.”)  (I’m not talking about paint here – red and green paint don’t cancel each other out, they just make mud-brown).

Interestingly, though, if you put complementary colors next to each other, they make each other shoe much more brightly, (They glow with more than their natural brilliance, is how Leonardo Da Vinci put it).

I wonder what would happen if you and I met?  Would we kill each other off, or make each other glow?  Maybe both.

The people of Cello know about The World, but the people of The World don’t know about Cello.  This creates interesting tension between Madeline and Elliot, since Elliot believes in Madeline but Madeline assumes that Elliot is creating a fantasy.  The truth, of course, is that everyone in the story is creating a fantasy of some kind.  This is a book about perception and assumption and imagination and reality.  Part of the trick of growing up for the characters (and there are many vibrant characters other than Elliot and Madeline) is that they have to release illusion and accept reality, without losing a sense of wonder and imagination.  It’s this tension that gives the book its power, and the moments in which reality shows itself are almost brutal in their emotional impact even thought they are all moments that play out quietly.

This book is the beginning of a series, and frankly I have mixed feelings about that.  I love the book, the characters, and the settings, so a sequel fills me with joy, but it doesn’t need a sequel.  It’s true that there are still mysteries in Cello (some of which seem tacked on at the last minute), but for the most part everyone learned what they needed to learn.  There was resolution.  and the resolution was hard but also healing.  This is a deeply optimistic book.

I read a lot of romance, and I love it, but I think what draws me to romance isn’t so much the focus on romantic love as the focus on relationships leading to growth.  This is not a romance but it had that quality of expressing that relationships are important, whether they are friendly, romantic, familial, or neighborly.  Elliot and Madeline have no romantic feelings for each other but they change each other’s lives in profound ways, and their lives are also affected profoundly by the other people in their lives. 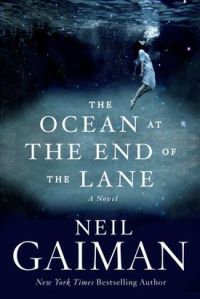 I imagine that if you’re reading a blog called “Geek Girl In Love”, you probably are already a Neil Gaiman fan – but if you’re not, this book is a great place to start.  In English major parlance:  it uses the tropes of mythology, horror, and coming of age to produce a lyrical vision of metaphor made actual.  In normal language:  it’s scary as shit.

Ocean tells the story of an unnamed man who is home for a funeral and takes a side trip to his childhood home.  Past his old home is a farmhouse and a road that leads to a pond.  At the pond, the man begins to remember long-buried memories from his childhood, when he was menaced by occult forces and aided by the Hempstock family.

This book is deeply creepy.  In some ways it resembles Coraline, with its child narrator who sees a world grown-ups can’t, and in which the family members who are supposed to take care of you are dark and terrifying shadows of themselves.  The book is also beautiful, with the Hempstock farmhouse representing all that is comforting and safe, and the natural world being both terrifying and lovely.  Here’s the boy eating dinner with the Hempstocks, following a harrowing night and about to face more terrors still:

I do not miss childhood, but I miss the way I took pleasure in small things, even as I could not control the world I was in.  I could not walk away from things or people or moments that hurt, but I found joy in the things that made me happy.  The custard was sweet and creamy in my mouth, the dark swollen currants in the spotted dick were tangy in the cake-thick chewy blandness of the pudding, and perhaps I was going to die that night and perhaps I would never go home again, but it was a good dinner, and I had faith in Lettie Hempstock.

Ocean is a bittersweet story.  It’s about discovering that there are worlds within worlds – not just ones of magic versus the mundane, but ones inside people’s minds, ones in which adults are thinking thoughts and wanting and fearing things that have nothing to do with you, the child.  The narrator takes the horrors he encounters more in stride than other children might, because he already believes that the world is not safe (he has no friends, and no one comes to his birthday party).  This isn’t a book about the truth setting you free – too much knowledge is seen to be a dangerous thing, and indeed, our narrator seems to be unsettled and vaguely unhappy as an adult, perhaps because he was always a sad person, perhaps because of a trace of the supernatural remains inside him, or perhaps because he was exposed to too much knowledge too soon. 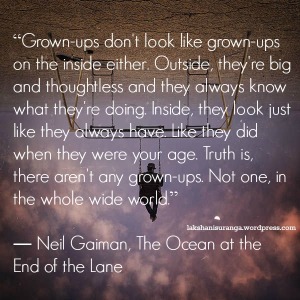 Neil Gaiman has a remarkable ability to inspire others.  People don’t just read his books, they inhabit them, and they interpret them with their own drawings and poetry and music.  Maybe this is because he creates a sense that the world he’s portraying is deeply layered.  For everything he describes, and he describes things vividly, there’s a suggestion of a whole host of other things not described.  So there’s room for everybody and every thing in it.  I highly recommend a visit to Zen Comics for this interpretation of Gaiman’s speech, “Make Good Art”.  I also recommend that if you are going to read Ocean, you set some serious time aside.  It’s a small book, but you’ll have to read it in one sitting.  Then, you’ll want to read it again – once for “what happens next”, once for the imagery and themes.