Got kids who are looking for summer reading?  My daughter, who insists on being called “Black Widow” in this blog, is an avid comic book reader and she is here to share her summer reading recommendations.  Black Widow is a nine-year old girl, about to start fourth grade.  Here’s what she recommends for young comics fans:

By Shannon and Dean Hale, Published by Bloomsbury USA Children’s

It’s exciting!  It’s about a girl who wants to get her mother back, and doesn’t like it when people steal stuff.  I like her.

Mom (that would be me) says:

This is an exciting, funny, and at times heart-rending and heart-warming story of Rapunzel’s quest to escape from her tower, save her mother, and defeat the woman who not only imprisoned her but has also oppressed the country.  This re-telling effectively mixes fairy tale tropes with those of the Old West, and Rapunzel is a great heroine – smart, determined, and brave.

The Adventures of Tintin

Black Widow says:  Parts of it are funny, and it has mystery.

Mom says:  Tintin is as exciting and fresh now as when it came out, but watch out for horribly dated prejudices.  Pick your stories with care and your kids will have a great time watching Tintin and his dog use brains and bravery to solve mysteries and get the bad guys.

Diary of a Wimpy Kid 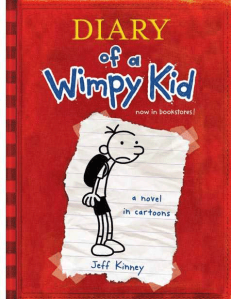 Black Widow says:  This is not a comic, exactly, but it has comics in it.  I like it cause it’s really funny.

Mom says:  I haven’t read this myself (and what a strange feeling to know that my daughter is old enough now that she reads things that I haven’t read to her!).  I can’t say personally how good these books are, but this series seems to be pure reading crack for the third grade set. 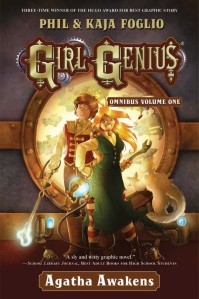 By Phil and Kaja Folio, Published by TOR

Black Widow says:  She’s a girl, and she’s a genius!  Also I like the art.

Mom says:  This is definitely PG stuff.  It’s written for adults, and Agatha spends a lot of time in Victorian underwear.  I’d recommend it for ages nine and up, depending on your comfort level with the material.  Girl Genius is available in print or as a free online web comic, and it is one of my favorites.  At our house, we never get enough of Agatha’s brains, the steampunk insanity, the madcap humor and non-stop action, and above all the copious amounts of Mad Science.  Read it your self, and then show it to your kids if you think it’s appropriate.

And here’s a couple of bonus reviews from kids who happened to be hanging out at my house while I was typing.  Mickey Mouse, age 10, recommends:

Written by Trevor Stewart, published by Little, Brown and Company

She says, “They’re long and interesting.  The kids are prodigies and they go on such crazy adventures and its fun to put yourself in their place and think of what I would do in their place.”

Flower girl says, “they are fun and exciting.  Like, they go on adventures most of the time and they go to places in books.  It’s cool and that’s why I like them.”