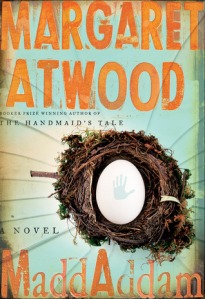 MaddAddam is the last book in the brilliant trilogy that includes Oryx and Crake and In the Year of the Flood.  I absolutely recommend it.  I give it many thumbs up.

MaddAddam has a helpful intro that sums up the events of the previous two books in the series.  I had read them, but forgotten almost all the details, so it was helpful to me.  I certainly recommend reading the previous two books, because they are amazing – but I think you can follow MaddAddam without having read them as long as you read “The Story So Far”.

This book concludes the story of a not very far in the future dystopia in which a bioengineered plague has destroyed most of humanity.  As with the other books, this one is dark, violent, gross, beautiful, touching, and has a deep core of optimism and warmth – much more than you’d expect from a story which, at various points in the series, has involved child abuse, rape, murder, mad science at its most disgusting, pollution, and the importance of eating whatever is in the freezer first, before the power goes out.  Of course a lot of this horrified me – it was meant to.  But at the end, I felt hopeful.  The series is demanding, but not nihilistic, despite having many nihilistic characters (particularly in the first two books – the characters in MaddAddam are pretty much focused on survival as a community and a species, not on wreaking havoc).

The other surprising thing about this particular piece of dystopia is that it’s funny.  The story of “Oh Fuck” for instance, is hilarious, as is the understatement of the century, “This is a major cultural misunderstanding.”  This humor helps make the poignancy of the story bearable – and it’s needed, as characters battle grief and confusion and loneliness in their own ways.  But they also make, or keep and strengthen, deep emotional connections to each other.

E.M. Foster said, “Only connect!”  The first book, Oryx and Crake, was about destruction.  The second book, In the Year of the Flood, was about survival.  This book is about connection, and that’s what makes it uplifting despite all the pain within it.

One last thing – Margaret Atwood claims that all the science stuff in the trilogy is either actually in place now or is theoretically possible.  As evidence, she has this site:  maddadam’s world.  It’s AMAZING.  so go check it out.