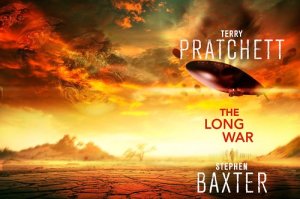 full cover (front and back)

The Long War is fascinating, but not engrossing.  The premise is an interesting one, but the story is so fragmented and slow-paced that it never seems to go anywhere.  From a cerebral standpoint, the book is a triumph.  From a story-telling standpoint, it tries to do so much that it doesn’t fully succeed with anything.

Here’s the premise of the series, as described in Chapter Three:

The Long Earth: suddenly, on Step Day, twenty-five years before, mankind had found itself with the ability to step sideways, simply to walk into an infinite corridor of planet Earths, one after the next and the next.  No spaceships required: each Earth was just a walk away.  And every Earth was like the original, more or less, save for a striking lack of humanity and all its works.  There was a world for everybody who wanted one, uncounted billions of worlds, if the leading theories were right.

Here are the central conflicts of The Long War:

1.  Trolls, beings who inhabit most of the Earths, are leaving those Earths that are settled by humans.  The trolls are frequently abused by humans and the question of what they are, in terms of their relationship to humanity, is controversial.

2.  Lobsang, an artificial intelligence, is manipulating many people who don’t want to be manipulated.  He has essentially brought Sister Agnes back from the dead so that she will keep him in line with her own strong personality.

3.  Back on Datum Earth, Yellowstone is behaving in a strange and ominous fashion.

4.  While Datum Earth is eager to solidify its control over the Long Earth communities, they are eager for more independence.

That’s a lot of plot for  a 420 page book, and as you can imagine, none of it really solidifies into a detailed story.  I do have a bias against books that jump from plot to plot, but I’m pretty sure even more flexible readers will find it frustrating that each plot line deserves its own book, and all of them get short shrift.  I love it that the authors try to figure out all the implications of stepping, but I think the book would have more emotional impact if it stuck to one or two implications and looked at them in closer detail.

Fans of Terry Pratchett should know that this book doesn’t have the zany quality of the Discworld books.  It does share a certain dry wit and the general worldview is similar.  Terry Pratchett loves protagonists with good common sense, and he has several in The Long War.  Readers should also know that although there are many characters, and most of them are enjoyable to spend time with, this isn’t a character-driven novel.  That’s not a criticism, just a fact.

The most emotionally involving storyline involves the fate of the trolls.  But the message of tolerance and acceptance is undercut by the fact that while many of the characters see the trolls and sentient individuals, the three characters who are most involved in reaching out to the trolls have no problem treating kobolds, who are clearly sentient individuals, with utter contempt.  And they don’t just show contempt for one kobold – they show contempt for the entire species.  I’m puzzled by this discrepancy.

Despite its flaws, I enjoyed The Long War.  I like the idea that the authors take a concept and really examine all the permutations of that concept.  But it wasn’t what I’d call a page-turner.  I cared about the characters, but mostly in a perfunctory way, because there wasn’t time to get to know them.  I never felt invested in what happened.  But I did enjoy watching two brilliant people throw ideas around on the page, and I am looking forward to the next book in the series.  So far, counting The Long War, there are two books in the series, and I recommend starting with the first one (The Long Earth). 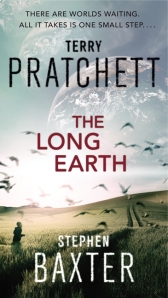 The series begins with The Long Earth