Welcome to Between the Lines! If you are in the Sacramento area, please join us at Arden Dimick Library, at 10:30AM on Saturday Sept. 26th. This month we are reading The Third Plate, by Chef Dan Barber. Barber belies that chefs have an opportunity to change the way people think about food. Here are 3 other chefs who did just that!

Soyer was a French chef who moved to England during the French Revolution. He worked for a number of celebrated restaurants, but his most significant achievements were as an inventor and a humanitarian. Sober invented a portable stove for use in the home and later invented the first camp stove for military use. Sober was a tireless advocate during the Crimean War for nutrition and safe food for the troops. He also sold cookbooks for charity and advocated on behalf of the Irish who were suffering through the potato famine. Soyer institute changes in how the government thinks about feeding troops and changes in how kitchens are stocked and organized that are still significant today.

Boiardi is the chef who brought us raviolis in a can. He came to America from Italy when he was sixteen years old and worked his way up to become head chef for the Plaza Hotel and a chef for President Woodrow Wilson.  When he opened his own restaurant in New York, customers begged to take home his sauces, so he started packaging them in clean used milk bottles. In 1927 he began a business of selling canned pasta products and sauces. He was commended for helping provide rations to troops in WWI. 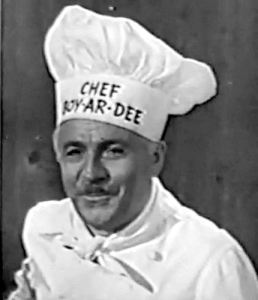 Waters is the owner and founder of Californian restaurant Chez Panisse. Waters has been a hugely successful promoter of organic food and local food. Most recently, she’s been working to make school lunches more healthy and to encourage schools to incorporate gardening into their curriculum. Since the early 2000’s, she’s been active in the Slow Food movement as well. Modern chefs and food writers cite her as having a huge influence on the way people today think about food. She moved the phrase ‘organic’ into the mainstream.