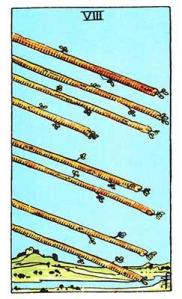 Lately I’ve been pulling the same cards for myself over and over again, which is annoying. It’s so rude when a deck won’t stop telling you what you need to know as opposed to what you want to know. I mean, really.

My instinctive reaction to this card is to interpret it as all this stuff coming at me. Without other context, just from gut instinct, this card symbolizes projects and deadlines and chores and all the overwhelming things in life. When I see it, I feel tired.

However, the card is more traditionally, and positively interpreted as the arrival of new opportunities or as a depiction of one’s creative potential reaching fulfillment. Time to rethink! 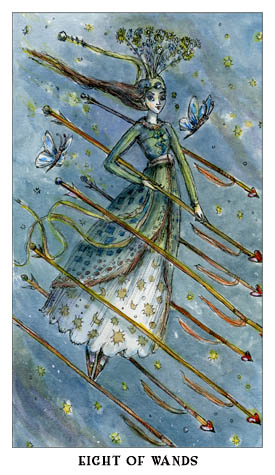 From the Paulina Tarot

Rachel Pollack, in Seventy-Eight Degrees of Wisdom, sees this as indicating that completion is near. “When the Fire finds its goal, the projects and situations come to a satisfactory end. The Wands have come to earth.”

The Holistic Tarot, by Benebell Wen, interprets the card in a similar way, and suggests the affirmation: “I won’t slow down, I won’t stop, I aim and shoot for my goal. I see my target and never take my eyes off it.” 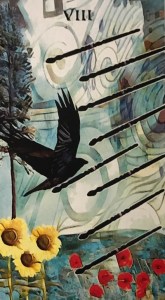 If one assumes that the wands are going from you or are coming to you, not at you, the card becomes very different. This isn’t an illustration of my burdens. It’s an illustration of  my power. This is my fire, and my efforts, and my determination, and an indicator that they will not be wasted! 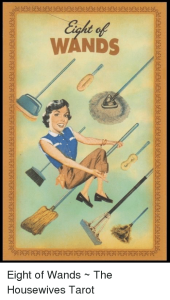 What cards do you fear? How can you reframe them as positive? Leave your comments here!