As I write this, I am about to have a houseful of teenagers arrive as we all wait for Stranger Things Season 3 to begin. I’m positive that if I try reading cards, they will all tell me to go to bed, preferably in a nice quiet hotel room. In lieu of a card reading, here’s my vision of a Stranger Things Major Arcana, as of the end of Season 2.

The Fool: Will Byers

It’s his journey into the Upside Down that sets everything in motion.

Wise, benevolent, and powerful when he has access to tools. Oh, Bob. We miss you.

Gone, but not forgotten, Barb was a speaker of truth who could tell when things were just not right.

Max is, after all, the boss, refusing to be sidelined and proving a powerful force to be reckoned with.

Dr. Owens isn’t actually in control (a must for The Emperor), but he THINKS he’s in control, and is able to control events up to a point. After the carnage of Season 2 he’s able to exert a little more power to free Eleven from a life in hiding. He’s knowledgeable and powerful, if eventually out of his depth.

He thinks he knows it all and he can’t wait to tell it to you, and if you aren’t listening he’ll MAKE you listen. The Hierophant isn’t really a bad card, but Dr. Brenner exhibits this card’s most irritating qualities. Bleeping Know-It-All.

Please. In the words of Murray Bauman: ““You’re young, attractive, you have chemistry, history, plus, the real shit: shared trauma.”

He DRIVES, y’all. Also, Steve has developed a tendency not only to physically drive the kids from place to place, but also to mentor them. In the process, he’s becoming less of a pretend persona and closer to his authentic self, in control of his own fate.

I loved this conspiracy theorist journalist who dispensed wisdom in Season 2. He lived in hiding, but was still willing to help two crazy kids with both conspiracy and relationship issues.

The Wheel of Fortune: The Demigorgon

If you kill it, or you chase it away, things look up. You get to go to the dance and everything is great. The Demigorgon (or some other representative of The Upside Down) reappears, and all bets are off. This creature isn’t an obvious Wheel of Fortune choice, but I chose it as a representative of the Upside Down who’s presence constantly upsets the status quo.

Trapped in a permanent stasis, she still manages to communicate to her daughter information that she can only have as a result of her traumatic experience.

Mike is essentially the leader of his group of friends. He’s the Dungeon Master, the one whose ideas drive their actions in and out of D&D. He’s also the peace maker, trying to keep the group cohesive and worried about maintaining the group’s balance at all times.

A Demigorgon will kill you but the Mind Flyer transforms you. Possession by the Mind Flayer utterly consumes and destroys.

Surround it with all the soldiers you like, this place is going down, over and over again.

The devil represents temptation, and being trapped in self-destructive patterns. Billy himself is trapped in a web of toxic masculinity he learned from his parents. As far as temptation goes, I see you, Mrs. Wheeler. Oh yes, I do.

Kali lives in Eleven’s world of intuition and special powers, and represents hope to the lonely Eleven.

I considered making Joyce the Empress, because of her Mama Bear energy, but I think she works better as The Moon. She’s anxious but highly intuitive, capable of accessing Will through the Upside Down.

Lucas is cautious, suspicious, and clear-headed. But he’s also loyal and resourceful and fierce. He’s honest and capable of admitting when he’s wrong. Friends don’t lie.

She’s the one who shows the cast what’s possible and what’s out there. In returns the cast shows the world (our world) to her. 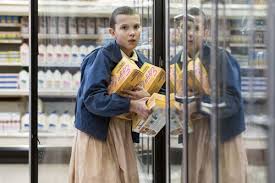 What do you think? Leave your comments below!

One thought on “Stranger Things and My Dream Tarot Deck”