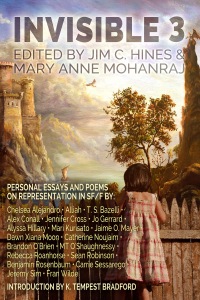 I’m incredibly honored to have an essay included in Invisible 3: Personal Essays and Poems on Representation in SF/F, an anthology edited by Jim C. Hines and Mary Ann Mohanraj.

One reason I’m so pleased to be part of this project is that all proceeds go towards Con or Bust, a non-profit that helps people of color attend science fiction and fantasy conventions:

Con or Bust, Inc., is a tax-exempt not-for-profit organization (EIN: 81-2141738) that helps people of color/non-white people attend SFF conventions. Con or Bust isn’t a scholarship and isn’t limited to the United States, to particular types of con-goers, or to specific cons; its goal is simply to help fans of color go to SFF cons and be their own awesome selves. It is funded through donations and an online auction held annually.

Invisible 3 is available digitally from Amazon, Barnes and Noble, iBooks, Kobo, Smashwords, and Google Play. Here’s the table of contents: