Looks like someone hijaked my blog again! Here’s a post from our teen correspondent, Linden, who has thoughts.

Hello readers, yes, all ten of you. It’s me, Linden with another top ten list! If you don’t know me I’m a 13-year-old slightly insane photographer with obsession for all things geek. You might know me from my review of a terrible Harry Potter fan fiction (My Immortal) that I wrote when I was probably ten and my more recent Top Ten Mable sweaters list that was going to be the beginning of a lot of other Top Tens before I gave up on that because I’m flakey…But I’m back now! Welcome to the Top Ten Characters That you Love to Hate! (one is the least loved to hate and ten is the most loved to hate)

Prepare for trouble and make it double with these three crazy Pikachu capturing villains. Team Rocket is relentless with capturing Ash’s Pikachu and who can blame them, that Pokémon defies all laws of well…Pokémon. Team Rocket is actually the reason I stopped watching Pokémon because they always fail by “blasting off again!” and it gets old fast. However despite how annoying they can be, and the fact that they ARE the bad guys it’s impossible for me not to smile when I hear their iconic motto or see their pictures. They have so much personality and I hear that spoiler alert they got married in the manga how cute is that! They also get some great lines, Meowth also said a quote once that stuck with me to this very day. I remember at one point he said, “It’s the first day of the rest of your life.” And ever since he said it I lived by that quote.

If you or a loved one is named Charlie then you probably already know about this series due to the number of people telling you to go to candy mountain. Charlie The Unicorn was a YouTube animated short series about a grey unicorn named Charlie who just wants to relax and be his unicorn self. However two other unicorns want to go on crazy adventures with him and refuse to take no for an answer. They are willing to do anything from pester to opening a portal inside his body and then dance in it to get Charlie to join them. They also steal his kidney in the first episode and later leave him to die greeting, “oh, you’re…back” when he somehow finds a way home. Nevertheless the unicorns prove loveable with their ridiculous voices and funny dialogue. Now if you’ve seen Charlie The Unicorn you’ve probably also watched Llamas With Hats which is made by the same people and are wondering why Carl the murderous llama who eats hands isn’t on this list. Well nobody loves to hate Carl. They just love him because Llamas With Hats doesn’t have much in the way of plot. Charlie The Unicorn has hardly any plot ether, but it has more then Llamas With Hats. 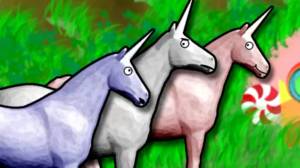 If you don’t know who the Joker is…how? How even…I mean what? Joker is the worst of the worst. He’s Batman’s most formidable rival and always will be. Joker the epitome of crazy and we well, love and hate him for it! Actually the only reason Joker is so low on this list is because of Harley. I used to think that Harley and Joker were relationship goals, but then I actually saw them interact and I realized that Joker is simply manipulating Harley and keeping her in a toxic relationship where she does everything for him and gets nothing in return. That’s not something that someone would love to hate that’s just something to hate. Harley deserves so much better and the way he treats her is just gross.

Bill Cipher is a dapper dorito demon determined to rule the universe and turn the bodies of everyone in Gravity Falls into a throne. He is pretty much a triangular Satan. He even makes deals with people in order to gain power! Bill has made everyone and their mother scream on multiple occasions (that’s based on a true story!) However despite being pure evil Bill is extremely fun to watch. He’s voiced by the shows creator (Alex Hirsh) and has some lines that are…they’re just beautiful. My personal favorites are, “PAIN IS HILARIOUS!” “OH I’LL HOLD MY HORSES…I’ll HOLD THEM…YOU MONSTER.” and, “HAHAHA…IT’S FUNNY HOW DUMB YOU ARE!” If you’re wondering why his quotes are in all caps it’s because that’s how he thinks. Bill even gets to sing the song We’ll Meet Again in one of the last episodes. 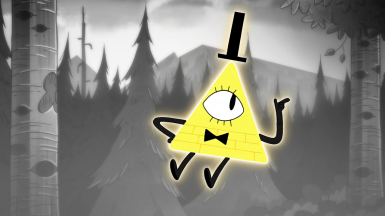 Misa Misa is, simply put an idiot, an idiot who happens to be madly in love with the main antagonist, Light. She’s easily manipulated, ditzy, and the provider of the show’s fanservice. What’s to love about this girl you ask? She’s an idiot! Death Note is an extremely serious show with very few funny moments. Misa however, is almost always part of the reason anyone watching starts to laugh. Her ditzy personality is so different from that of the other serious characters that it’s comical and her shrill voice just makes it funnier. Laughing during a show like Death Note is heaven

Oh King George, you crazy romantic. You’re the psycho ex of all of America! While King George was a real person (the king of England for that matter) and we’re sure he was heartbroken when America left England for that sexy beast that is freedom, we all love and despise him for his three songs in the Broadway musical about the revolutionary war, Hamilton. Originally George was only going to have one song, but he was too good to only appear once. His first song, You’ll Be Back features him singing about how sure America wants to leave him now, but they will lose the war and will have to let him lead them once again as if nothing had ever happened. One line from the song being, “I will kill your friends and family to remind you of my love.” Of course this doesn’t work out and America wins to which George sings about how that’s all good and everything (to quote he says, “You’re on your own! AWESOME WOW!”) but what now? He acts high and mighty and tells America not to come crawling back to him for help when its people say they hate it. Finally his last song is about his reaction to finding out John Adams is running for president instead Washington, which is, “They will tear each other into pieces JESUS CHRIST THIS WILL BE FUN!”

I have a confession…I’ve…never played Portal. I know, I know – how can I classify a character as one that I love to hate if I don’t even know what they’re like? Well I actually do know a bit about her. I’ve seen a few play throughs of the first couple challenges in the game and I know her famous song, Still Alive by heart. Based solely on this I can tell you with 100% certainty that GLaDOS deserves to be not only a part of this list, but a high ranking spot on the list as well. GLaDOS is the proud singer of what is quite possibly the single most passive aggressive song in existence, Still Alive witch features passages like, “I’m not even angry…I’m being so sincere right now…even though you broke my heart and killed me…and tore me to pieces…and threw every piece into a fire…as I burned it hurt because I was so happy for you!” she sings in a girlish robotic voice that shows she is done putting up with bullshit of any kind and she will live long after you die so HA!

It is safe to assume that Bellatrix Lestrange is loved and/or hated by every single Harry Potter fan in existence. Some just hate her some just love her, but most love to hate her and it’s easy to see why. Bellatrix is an insane witch who finds joy in murder and in the Dark Lord Voldemort (whom she has a crush on). This makes her one of Voldemort’s most loyal and terrifying followers. She shows zero remorse for killing and in fact sings gleefully about it instead! She is also adept in the art of torture second only to Umbridge who is another character in the series. Bellatrix is probably the only reason to like the Harry Potter films over the books. In the films she is played by the famed Helena Bonham Carter, and like most characters on this list she is extremely fun to watch. She’s energetic and destructive. She dances on tables to break glass, she twirls her hair and pouts her lips when taunting people, and her laugh, oh my god that laugh, it’s enough to make anyone smile even though what she’s laughing about is often terrible and makes everyone sob whenever it’s brought up later. 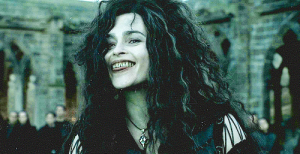 Invader Zim is a cartoon about an alien named Zim who was sent to take over the earth and destroy humanity…by accident. You see Zim almost destroyed his home planet last time he was sent to take over anything so he was banished. However the next time his fellow aliens were sent to take over other earths he decided he had to be apart of it and the Tallest (the rulers of his planet) didn’t know how else to get rid of him but to send him as far away as they could to conquer a planet nobody had ever heard of. That planet happened to be Earth and Zim, though incompetent, is relentless. Some people might say that Dib (the only person who realizes Zim is not who he seems) is the villain since Zim is the protagonist and Zim just wants to prove himself to the Tallest who make him the laughing stock of their planet. However even though this makes Zim easy to sympathize with it don’t make him good. Zim is more then willing to destroy the human race. One time Dib told Zim that one day everyone would know he was an alien because he shares no organs with human beings. So Zim decided to get himself some human organs by harvesting them from children and replacing them with household objects. (One girl’s heart was stolen and replaced with a house cat.) Another time Zim realized that all humans seemed to have at least one friend. So he decided that in order to blend in with them he would need to get a friend as well. That’s all well and good except for the fact that Zims way of getting a friend was luring a child into his house, pulling the kids eyes out and replacing them with new robotic eyes in a twisted form of mind control. So yeah I’m pretty sure Zim is the bad guy in this situation. If you haven’t seen Zim yet I definitely recommend it especially since he has a new movie coming out (as the trailer says) soon…ish

So did you agree with the list? Did I miss one of your least favorite favorite characters? Maybe someone got a lower ranking then you thought they deserved. Tell me in the comments and I’ll see you, in another dimension.