I recently finished my last belt in Tae Kwan Do. No, I did not become a Grand Master, the level at which presumably you finally learn to fly across rooftops like those people in Crouching Tiger, Hidden Dragon. No, I made it all the way to Low Green Belt. Those who know about the belt levels in Tae Kwan Do are not impressed, because frankly, that’s not very high as belts go (I completed white, orange, and yellow). Those who know my medical history, however, realize that this makes me a total badass. Here, for example, is a picture of my ankles, which, as you can see are very confused about their job. Ankles, your task is to hold the leg up. It’s not rocket science. Ideally, the leg is at a 90 degree angle from the foot. My left ankle in particular stomps so far over that I basically walk on the inside edge of my foot. My toes are weird because the foot bones grew improperly. So doing things like balancing on one foot, or pivoting on one foot, or heck, even standing upright? are harder than you’d think.

I also have mild to severe problems with my knees, my hips, my back, my shoulder, and my neck. In the last two months of class I adjusted to a new medication that turned me into a drooling zombie, I battled an evil death virus, and I got a cortisone shot in my hip. I took Tae Kwan Do for six months, three times a week, and this is what happened when I came home every single time:

I took a class mostly with kids, all of whom bounced around like rubber bands while I limped from one spot to the other. I did not look like I thought a martial artist should look. I looked like a middle-aged, slightly overweight, very short, very confused woman with glasses who could not remember the moves. I was like the Panda in Kung Fu Panda without the bouncy quality.

Still, the fact remains that I hauled my arthritic butt to class three days a week (more or less) for six months and limped my way through my forms. Eventually my doctor grounded me, and frankly that came as a relief because by that time EVERYTHING I did in class hurt. It hurt just to stand around. So it is with a relatively light heart that I toddle off to the heated therapy pool to do, I dunno, water aerobics or something – hopefully something that won’t make my knees feel like my patellas are about to shoot across the room. 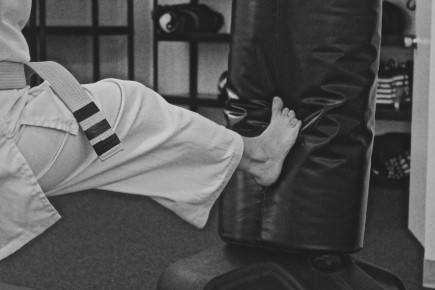 Front kicks are AMAZINGLY satisfying. I mean, you can really get some force behind a front kick. They are THE BEST.

Above all I learned how rewarding it can be to get off the bench. For months I was so embarrassed to get up in class, with all the little kids, in front of the parents who were hanging out on the benches waiting for class to get over. I felt self-conscious. I felt ridiculous.

Now that I’m done, I feel badass. Because I tried something, and I learned something (and as a side note, my pants all started to fit again, so that’s a win). I’ll miss it, although I won’t miss the specific sensation of getting my bad hip to swivel into a round kick. And I’ll still be around because my daughter (who took these photos) is also in Tae Kwan Do. Her goal? Grand Master!

4 thoughts on “In Which I Brag Shamelessly”