Primer is one of those movies that went under the radar when it came out but has since developed a loyal following, and it shows up all the time on lists of good time travel movies. when it turned up on my Netflix feed, I figured I’d see what everyone was talking about – and it blew my mind. If you want a break from epic, blockbuster, high budget sic-fi, check out this tiny film that packs an amazing amount of suspense and concept into an otherwise small movie.

Primer is the story of four guys (Aaron, Abe, Robert, and Phillip) who are engineers. In their ‘spare time’, they try to build stuff in Aaron’s garage. These early scenes are spot on in terms of character interaction between four engineers who have known each other for a long time – the jargon, the interrupting each other and finishing each other’s sentences, the tensions and tangled history, the jury-rigging parts, the money problems, the complete lack of glamour both at work and in the garage – it feels like a documentary both because of how it’s shot and because the writing and acting is so accurate to the interactions I see between science/tech people in real life. These four guys feel like people who have worked and fought together for a long time. There’s very little exposition here – you have to just try to keep up, and I found it easy to get the gist of what was happening even though I don’t believe I understood a single word. They are out of money, they don’t know what to focus on next, and they are building cool stuff in hopes of a big money-making breakthrough.

In the course of trying to build a device that makes things lighter (or weightless), Abe and Aaron discover that they have accidentally built a time machine. From this point on, the movie is almost a two-person play, since Abe and Aaron don’t want the other guys to know about the machine. Abe and Aaron have to figure out what to do with the time machine and since they are engineers you can bet that “take it apart, burn the notes, melt the parts, and never speak of it again” is not an option that leaps to their minds.

Primer was made for $7000 and it lasts for 77 minutes, although it takes a lot longer to watch it because you have to pause a lot and take notes and say to your spouse, “What just happened?” and then argue about what just happened until you remember that the movie isn’t over yet. You will also have to set aside several days to google “Primer, movie, timeline.” Some movies are confusing in a frustrating way – they feel sloppy. You are pretty sure that what you are watching doesn’t make sense, and never will, and was never meant to. Primer is plenty confusing, but in a tantalizing way. It doesn’t feel sloppy – it feels tight and smart. It expects you to sit down, pay attention, and keep up.

A lot of people love this movie because SCIENCE. I’m an odd duck, because my interest in science is passionate but also superficial. I’m less interested in science than in the process of science, and how scientists think. I loved the lack of glamour in this movie. The grainy film gives it a found footage feeling without having to stick to the rules of found footage and without the curse of shaky cam. The settings are suburban garages, U-Haul storage rooms, and motel rooms. The cold room guy at the University of Texas is actually played by the cold room guy at the University of Texas. The sense of mingled tension and dread and confusion and fascination works for the audience because we are experiencing the tension, drew, and fascination that Abe and Aaron are experiencing. This is a fascinating, weird, unusual movie that does a lot with a little and will keep you googling and debating for days. A+. 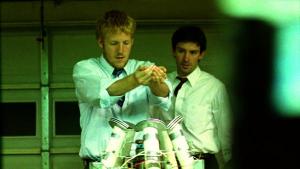