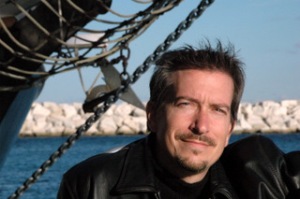 Brad Beaulieu is the author of a new epic fantasy series, Twelve Kings in Sharakhai. This series follows a woman, Ceda, as she uncovers a secret about the kings that threatens their rule. In this interview, Brad talks about writing female characters, what interested him in desert, as opposed to European-based fantasy, and what we can read while we wait for the next book to come out!

Tell us about your setting. It is refreshing to read fantasy that is not set in a version of Europe. What drew you to a desert setting and a Persian fantasy style?

I’d long wanted to scratch the itch to write a desert story. I can attribute this in part to liking the tales of the Arabian Nights (or One Thousand and One Nights), particularly the milieu. In fact, as my last series, The Lays of Anuskaya, progresses, you can see more and more of the Persian-influenced Aramahn coming into the picture, culminating in long stretches of desert scenes in the final book, The Flames of Shadam Khoreh.

So the desert was something I really wanted to explore, and I knew I wanted to steep the history of the city in a nomadic, Bedouin-like culture, but I’d probably (letting my geek flag fly here a bit) give the most credit to the Thieves’ World anthologies for the inspiration for the setting. I loved the city of Sanctuary when I first started reading the anthologies in high school. I loved that it was the “armpit of the empire,” that it was a meeting point of old and new as the Rankan Empire drove into Ilsigi territory, that there were pantheons of gods vying for power, and in fact commingling even as they fought. Above all, I loved the vastness of Sanctuary and the hidden wonders it contained.

The feel of that is what I wanted to explore with Sharakhai. Sharakhai is in some ways a mere city state. But in effect it controls trade throughout a massive desert bordered by four powerful kingdoms, and because it controls trade, it has amassed incredible wealth and power. It hasn’t done so without making enemies along the way, however. The twelve immortal kings of Sharakhai are hated by many. And the roots of the story are buried deeply in that hatred.

Why did you choose a woman as your protagonist? Was it challenging to write from her point of view? What advice would you give authors who struggle with writing characters of other genders and/or races?

It’s always difficult to pinpoint exactly why characters turned out like they did. But I can say this. I grew up in a somewhat female-dominated household. This not to minimize my dad’s influence. He has played and still plays a big part in my life. But he was the breadwinner in the family, and so it’s just a simple truth that I saw my mother and twin sisters (one year older than me) more. My mom was very caring and understanding and patient (perhaps more than I had a right to expect). I’m not afraid to admit that my sisters and I fought quite a bit, but we loved each other a lot too. So while it wasn’t a conscious thing on my part, I know that they played a role in the formation of Çeda’s character and her mother’s as well.

I didn’t find it particularly difficult to write about Çeda. And I think the reason why is linked to the advice I would give young authors struggling with writing certain characters (whether it’s because they’re a different race, sex, religion, or what have you). To me it boils down to knowing them well enough to make them real. We all have stereotypes in our heads for how a segment of our society acts. It’s inevitable. It’s how humans work. But it’s up to you as the writer to do the hard work of understanding the social strata of your world more deeply, and then to make individuals out of the characters that inhabit it. It’s only by knowing the world and the characters intimately that they move beyond stereotypes and start to become real people with a life and breath of their own.

I often find that when a character feels dull to me, it’s because I haven’t dug deep enough, explored enough. That’s when I stop and flesh things out. I figure out who they really are by giving them real experiences (backstory), which in turn answers some key questions. It tells me about their hopes, their desires, their fears. Inevitably I find that doing that work brightens the character for me, and I can then return and inhabit them more fully, which in turn lets me (one hopes) tell their true tale.

This is the first book in an epic fantasy series. Do you know how many book will be in the series? Do you know how it ends? Can your fans bribe you to reveal the ending on a person-by-person basis, and if so, do you prefer food, precious stones, or rare books as currency?

I’m planning on it being a six-book series. As for how the story goes, I can say this: I don’t know all of the details, but I know the main purpose of each book.

I was on a panel at Gen Con a few years back and Scott Lynch was talking about series that tell larger tales, but where each book in the series takes on a different aspect of it. Scott used the example of Lois McMaster Bujold’s Vorkosigan Saga, but I’ll use Scott’s own Gentlemen Bastards series, which explores different aspects of thievery. In The Lies of Locke Lamora, Scott has the eponymous Locke crafting a grand heist, a scam to top all scams. In the second book, Red Seas Under Red Skies, he explores piracy. In the third book, he explores politics and the cheating and scamming that therein lies. In his forthcoming fourth book, The Thorn of Emberlain, it looks to be espionage.

I really loved that take on a series when I heard him talk about it, and it was timely, because I was in the middle of writing Twelve Kings. I decided that I was going to do the same thing, tackle a different aspect of life in the desert with each book. In the first, we see much of what life is like on the streets of the Amber City. In the second book (without getting too spoilery), things move closer to the Kings. In the third book, things may drift toward the desert. In this way, I hope to keep the story fresh, and to reinvent Çeda to a degree from one book to the next.

I’m nearing the end of the second book now, and things are going mostly to plan. As for how much I’ll reveal? Hmm. I could be coerced, but it would take some mighty fine chocolate to do it…

What other works of fantasy would you recommend for readers who love your book and need something to read between installments?

I enjoyed my time in the pages of Throne of the Crescent Moon, by Saladin Ahmed. It was a very interesting take in this age of, ahem, doorstop fantasies to go with a more svelte, sword-and-sorcery approach. The interplay between the old, cantankerous Doctor Adoulla Makhslood and his younger, more energetic companions, Raseed and Zamia, was great. And I loved the way he painted the city of Dhamsawaat. It was a rich place, and one brimming with a history and culture all its own.

By the way, if any of your readers are curious to learn more about Saladin and his work, I run a podcast with my partner in crime, Gregory A. Wilson, called Speculate! We do short series of shows called triptychs, in which we review a work in one episode, interview the author in a second, and discuss writing technique based on the work in a third. You can find Saladin’s episodes here: Review of Throne of the Crescent Moon, Interview with Saladin, Writing Technique show.

If readers want another Arab-esque tale, I can also recommend Howard Andrew Jones’ The Desert of Souls. The thing that attracted to Howard’s debut novel was the setting (8th century Baghdad). But I also loved the notion of having a mash-up of sorts with a Sherlock Holmes sort of character in Dabir, along with his trusty comrade, Captain Asim, the Watson to Dabir’s Holmes. It was a fun combination of ideas, but don’t think that this semi-historical fantasy is not its own tale. It is. And Howard really brings Baghdad to life through his meticulous research of the period.

One last set of books I’ll mention is C.J. Cherryh’s The Faded Sun trilogy. It was my first exposure to a spec-fictional world based on our own Arabic cultures, and I loved it. I devoured these books, a science fictional tale that spoke to cultural identity, individuality, sacrificing for the common good. It’s one of the tales that spurred me, at least in part, to tackle a story set in a vast desert with a massive city at its center.

As a small aside, there are some books where the artwork really nails the feel of the book. That was true for the gorgeous pieces of art that went with the individual books, especially the one by Michael Whelan for Kutath (re-used for the trilogy as pictured above). I remember flipping to that cover often, just imagining the world, what it would be like to live there, to meet those people.