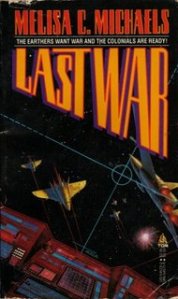 The Skyrider series is a series by Melisa Michaels. Prior to writing this review, I was convinced that the only two people ever to have read the series are myself and the friend who loaned my the books back in high school. Imagine my delight to learn that Michaels has her own TV Tropes page and won a Locus Award in 1986. I’m not the only fan out there! To me, my sisters!

Michael has written several series and stand-alone books, but the one that won my heart was the Skyrider series, which consists of Skirmish, First Battle, Last War, Pirate Prince, and Floater Factor. In the future, Earth has colonies in the Asteroid Belt. Most people in the Belt are miners or pilots. Melacha, AKA Skyrider, is the most famous pilot of them all. I avoids close attachments to people ever since her lover died, but she can’t avoid flying with  hot-shot pilot Jamin and getting to know his kid, Colin. As the books progress, Melacha gets drawn deeper and deeper into the conflict between Earth and the Colonies and deeper into the problems of Jamin and Colin.

I discovered these books in ninth grade and they had a huge influence on me. Here’s how these books blew my mind:

The Heroine Is Not Your Sex Toy

All the books except Pirate Prince are told from the point of view of Melacha. Melacha is, essentially, Han Solo. She was the first female character I encountered who could even come close to that description. I adored the fact that she enjoyed sex but did not crave romance, was decent with kids but did not want any herself, the fact that she is not presented in a romantic or sexual light, and the fact that she is absolutely the protagonist – not a stand-in, not a trophy, not a side kick, not a sexual object.

The Heroine is Always Competent

She’s a famously amazing pilot. She’s good at fighting hand-to-hand. She’s also a good planner, although she sometimes fails to consider subtle plans if she thinks she can just blast her way out of something. She likes to save face, which can be incredibly irritating yet totally consistent with her character. Oh, and by the way – Melacha is mistrusted because in a time rife with conflict between the settlers of the asteroid belt and the people who still live on Earth, Melacha has ties to both sides. She’s not mistrusted because she’s female. Nobody cares.

The Snark is Strong With This One.

Melacha is the Queen of Snark but she’s not alone in her snarkdom. Everybody in this series is snarky. Even the sweet, innocent kid has moments of snark. I love snark, and I’m especially fond of Melacha’s go-to response to award questions: “‘Shut up,’ I explained,” or, alternatively, “‘Never mind,’ I explained.”

The Flight Scenes are So Shiny and Chrome

Gorgeous fight scenes. Incredible. The cover art is great, too. You’ve no idea how desperately this series made me long for a Sunfish of my very own.

Melacha drives Jamin crazy because she won’t do anything for free – but with her money she tends to buy things like medication and supplies for colonists. She insists that she’s not a do-gooder, and she certainly keep a lot of money around for herself – but it’s amazing how much gets spread around to people who really need it. Meanwhile, it’s nice to see a female character who isn’t afraid to talk about money or to demand to be paid what’s she’s worth, which is a lot.

A final note: I also love the world-building and the build-up of conflict in the series. The colonies are made of people from all over Earth. They speak Company English, their native languages, a kind of grammatically mangled Company English, and pidgin, also known simply as ‘Rock’. When people use one of these variants, it’s clear that this is a cultural and contextual choice, not a sign of illiteracy or ignorance. Most of the story is told in standard English, which is too bad, because I’d love to read a whole book written in this mangled Company English, as laid out by a minor but memorable character of Romany and Asian descent:

He looked prim. “Usually what people do, what polite people do, when for some reason if they want to talk about those so-called racial characteristics such as what you call slant-eyes, usually what they say is they say ‘Oriental.'”

And I’d love more pidgin dialogue, as in this conversation between Melacha and an older miner:

“Da kine wen take all our rocks, hey, risen, maybe? All Belters down Home Base come, t’row one party, so des ka? Maybe say who knees rock, yeah? Who knees? I one rock need, ‘ass who. All my family knees one rock already. Da kine wen take, you be one war!”