Here’s a video set of Jo Dee Messin’s cover of “Sharp-Dressed Man” about all those gorgeous men in gorgeous (and often ridiculous) period drama clothes. Revel in the female gaze, my well-dressed dudes.

And hey – if you clicked on this earlier and got puppies instead of hot men – LORD WHAT DOES IT TAKE TO MAKE YOU PEOPLE HAPPY?  I do believe we have the correct video now!

Every month I write an article for Smart Women, Trashy Books about kicks women in history and link to it here.  This month I’m featuring Khutulun – military leader, archer, soldier, and champion wrestler.

Khutulun served as her father’s military leader and took part in combat, taking many prisoners.  According to Marco Polo:

“[She would] make a dash at the host of the enemy, and seize a some man thereout, as deftly as a hawk punches on a bird, and carry him to her father; and this she did many a time.”

She’s most famous for being an unbeatable wrestler.  She refused to marry any man who she could defeat in a match until finally she fell in love with one of her father’s soldiers.  Khutulun continued to lead the army after her father died.

Head over to Smart Bitches to find out more about this amazing woman!  For more warrior women, I highly recommend the book Secret History of the Mongol Queens, by Jack Weatherford.  You can read my full-length review of the book here.

You can find Taylor giving videos on film and on paper.  Here are some highlights from a few of her interviews.

I notice that you continue to use Twitter, even as you recognize the flaws in some of its business practices. How do we reconcile our enjoyment of social media even as we understand that the corporations who control them aren’t always acting in our best interests?

I can’t wholeheartedly say I enjoy Twitter, or at least I’m enjoying it less and less these days, but I don’t think there’s a contradiction. I use lots of products that are created by companies whose business practices I object to and that don’t act in my best interests, or the best interests of workers or the environment — we all do, since that’s part of living under capitalism. That said, I refuse to invest so much in any platform that I can’t quit without remorse, since you never know when there will be a significant change to the terms of service or to the service itself. Facebook’s invitation to “pay to promote” status updates was a tipping point for me and I jumped ship.

Taylor: Okay, this will seem like a silly example, but look at the whole discourse around “selling out,” a concept people say is irrelevant because there’s no more distinction between mainstream and underground, inside and outside (which I don’t really believe, but that’s another issue).

Rumpus: We used to get so enraged by Nirvana. Now it’s like, whatever.

Taylor: Yeah, and I’m a little bit of that old guard. My point, though, is that if lines have indeed shifted, it’s not so much that the younger generation just doesn’t care, it’s that we have ceded more and more of our public life over to the private sector. If you grow up with advertising at school, you have come of age in a sold-out world.

“Can The Internet Be A “People’s Platform?” from The Nation

SL: Could you say a little bit about the ideal role of government in the Internet and tech?

AT: The public interest is aligning less and less with tech corporations—once seen as our allies against the old oligarchs—and more with government regulation. The scandal about collusion to keep down engineers’ wages at Google and Apple? You need antitrust laws. The terrible conditions at Amazon’s warehouses and Apple’s factories? You need strong labor laws. State and corporate surveillance? Privacy protections. Essentially what the protesters in the Bay Area have been saying is: “We want to tax Twitter. We don’t think they should get a huge break to come here and then have all the wealth that they generate used to evict people.”

What do you think?

My regular Monday morning post has turned into a Monday night post, but that’s the kind of havoc a week at RT 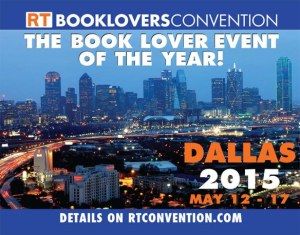 Booklover’s Convention will play with your schedule.  This was my first RT and there are several differences between it and a science fiction convention:

1.  Everyone is dressed up.

2. Everyone seems to shower (I applaud this) and they wear make up and do their hair (who are these people?).

3. Almost everyone is female.

4. There’s a Book Fair at the end at which you can buy books and have them signed by the author.  But there’s no dealer’s room.  Instead of there being stuff for sale, everyone at RT is desperate to give you free stuff.  For instance, here’s my new collection of ballpoint pens: 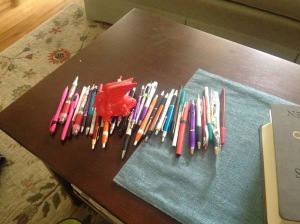 I was ruthless about bringing home a small selection of books RUTHLESS.  Here’s the loot: 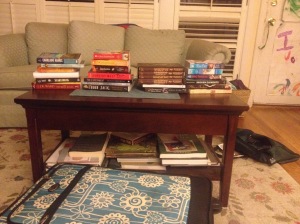 By far the most delightful aspect of RT was finally meeting my fellow Smart Bitches from Smart Bitches, Trashy Books face to face.  The conference was good but the time I spent with my friends was FABULOUS.  We talk online every singe day and to meet face to face was like taking a deep breath of fresh air.

As far as convention events, I went to a lot of things that were pitched at readers, just for fun, and I also attended some panels on self-publishing and on blogging – so expect great things in the next year.  As Bathsheba says in Far From the Madding Crowd, “It is my intention to astonish you all.”  Right after I sleep for a whole week and wake up just in time for a day trip to Baycon!

This month we’re reading The People’s Platform: Taking Back Power and Culture in a Digital Age, by Astra Taylor.  In this book Taylor challenges the idea that the Internet is an open marketplace, showing how companies like Google, Amazon, and Facebook push out smaller companies, and arguing that real-world inequalities exist in the Internet as well as in the “real” world.

In the 1960s, computer labs in the US and Europe began experimenting with “packet networking”.  The Advanced Research Projects Agency Network (ARPANET) was the first network to use packet switching and TCP/IP, two technologies which are vital in making the Internet work.  The number of computers linked to ARPANET and it was declared “operational” in 1975.  The network was under the control of the Department of Communications and was only to be used for government purposes.  ARPANET was decommissioned in 1990.

Remember how much flak Al Gore took for claiming to have invented the Internet?  Well, he never claimed to have created it, but he did claim to have been instrumental in moving it forward though legislation, and that’s an accurate claim.  Gore authored legislation called The High Performance Computing and and Communications Act in 1991.  The act led to the creation of infrastructure (“the information superhighway”) that made the creation of the Internet as we know it possible.

As TCP/IP technology became more common, more and more systems could connect to each other.   The 1980s saw the fledgling Internet becoming global.  The Internet also became both more public and more commercial, with the final restrictions on carrying commercial traffic ending on April 30.  Google was incorporated as a privately held company in 1998.  The transitive verb “to google” was added to the Oxford English Dictionary in 2006.  Facebook was founded in 2004 and Amazon, the old veteran of the group, has been around (and taking all my money) since 1994.

Which brings us today, where the Internet brings you bloggers, email, and pictures of cats:

Also known as a short documentary about my calendar.

On my way to RT Booklovers Convention today! So excited to be meeting my fellow reviewers from Smart Bitches, Trashy Books face-to-face for the first time. I’ll be focusing on attending panels and workshops having to do with social media, marketing, pitches, and self-publishing (hint of things to come!). But let’s be real – I’m really planning to spend as much time as possible hanging out with the posse from Smart Bitches, eating too much, collecting swag, and having a good time. See you in a week – try not to break the Internet while I’m gone!

The People’s Platform  is written by Astra Taylor, a filmmaker, journalist, and activist.  Taylor was born in Canada in 1979.  Her family moved to Arizona and then to Georgia, where her father was a professor.  Taylor and her siblings were “unschooled” and Taylor remains an Unschooling activist.  You can read about Taylor’s experiences with unschooling here.

Taylor has created two documentary films.  Zizek! is about philosopher Slavoj Zizek, a controversial figure who addresses the concept of “the real” as it relates to culture and political systems.  Her second film, The Examined Life, follows eight philosophers through New York City as they discuss their ideas.

As a writer, Taylor has published articles in numerous publications, including Ad-Busters, The Nation, and The London Review of Books.  She’s the editor of Examined Life and co-editor of Occupy! Scenes from Occupied America.  You can find links to her articles for The Nation here:  they include topics of education, debt, prison reform, and the Occupy movement.  You can find her articles for Salon here.

Yes, I know, Frozen parodies are so last summer, but I’m really tired so this made me laugh. 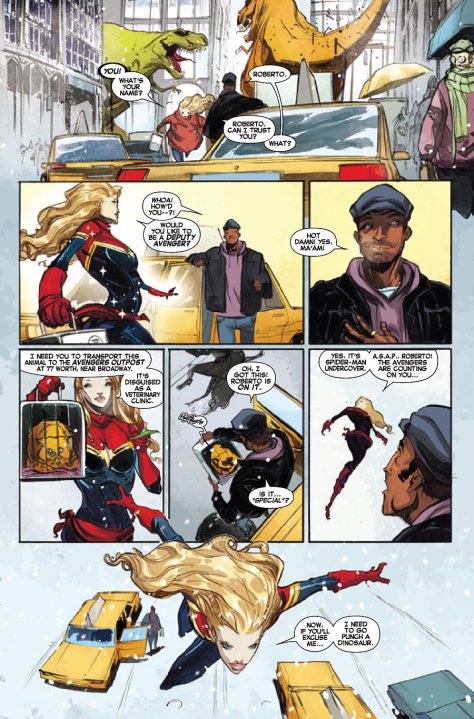 Dinosaurs. Spider-cat. I rest my case.

This month’s book club pick is a nonfiction by Astra Taylor, called The People’s Platform: Taking Back Power and Culture in a Digital Age.  In this book, Taylor examines the way the Internet inhibits and encourages art, business, and innovation.  In the book, Taylor “challenges the notion that the Internet has brought us into an age of cultural democracy.”