This month’s book club pick is The Twelve Tribes of Hattie.  Discuss in the comments or with us at Arden Dimick Library in Sacramento, California, on March 28 at 10:30AM!

The Twelve Tribes of Hattie is set in motion when Hattie leaves Georgia for Philadelphia.  Her move is part of the Great Migration, a neglected moment in American history when an estimated 1.6 million African americans left the South in the wake of the Civil War to live in the Northern cities, between 1910 and 1930.  The Second Great Migration took place between 1940 and 1970, following the Great Depression.  In this second migration, an estimated 5 million African-Americans moved from the South to California and to Northern cities.  By then end of the Second Great Migration, 40% of US blacks lived in the North, 7% lived in the West, and 80% of African-Americans lived in cities.

The Great Northern Migration led to the rise of great cultural centers and movements, including the Harlem Renaissance.  Jacob Lawrence, a New York painter, documented the migration in a ground-breaking series of painting, including this one, from 1940:

Panel 1: “During the World War there was a great migration North by Southern Negroes.”

According to Nicholas Lemann, who wrote about the Migration in The Promised Land: The Great Black Migration and How It Changed the North, the Migration:

was one of the largest and most rapid mass internal movements in history—perhaps the greatest not caused by the immediate threat of execution or starvation. In sheer numbers it outranks the migration of any other ethnic group—Italians or Irish or Jews or Poles—to [the U.S.]. For blacks, the migration meant leaving what had always been their economic and social base in America, and finding a new one.

The Great Migration permanently changed the social, economic, and political shape of both the North and the South.  African-Americans who travelled to the North experienced discrimination, particularly in the areas of housing and at the hands of recent immigrants such as the Irish who had previously worked the same kinds of jobs that African Americans were taking.  Yet they continued to travel, following jobs and a hope of greater freedom from racial violence and segregation.

For more information about The Great Northern Migration, check out The Warmth of Other Suns, by Isabel Wilkserson, which received the National Book Award for nonfiction.  You can find an interview with her at NPR. 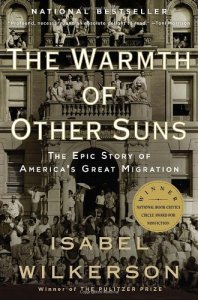