This month in Between the Lines Book Club we are reading Emma, by Jane Austen.  Join us in the comments or in person on February 28th, at 10:30, at Arden Dimick Library in Sacramento, CA!

Jane Austen was born in 1775.  She was one of eight siblings, all of whom were boys with the exception of Jane and her sister Cassandra.  Jane and Cassandra lived together throughout most of their lives.  They both experienced failed engagements and never married.

Jane was something of a tomboy as a child.  She and Cassandra were educated at home and at boarding school.  Jane made prolific use of the library of the time – it was a subscription library and you paid to be allowed to request that various books be sent to you for a set period of time.  Jane was a prolific writer as a child and a teen, writing plays for the family to perform as well as funny stories and essays.

Jane is often portrayed as someone who lived a small, parochial life, but she was actually quite well-travelled within Britain.  She lived for many years in the tourist town of Bath, and travelled all over the English coast.  She also loved visiting her brother in London where she went to the theater and the shops.  Through her brothers in the Navy and relatives in India and France, she had access to information about the world at large and life at sea (she manages to sneak a spectacularly dirty navy joke into Mansfield Park).  Austen published her books anonymously but her identity was an open secret and she achieved a modest amount of fame.  Then, as now, her most beloved work was Pride and Prejudice.

Jane died in 1818.  The cause of her death is unknown, although it is frequently thought to have been Addison’s Disease.  Her novels  Northanger Abbey and Persuasion were published posthumously.

You can find more at my post “10 Things you Didn’t Know about Jane Austen” and in my book Pride, Prejudice and Popcorn: TV and Film Adaptation of Pride and Prejudice, Wuthering Heights, and Jane Eyre.  It has a section about Jane Austen’s life and is available from these retailers for .99: 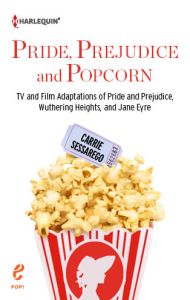