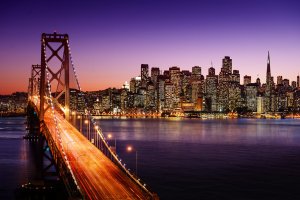 I live about two hours from The Bay Area, that is to say, the area around San Francisco. I live in the suburbs. I get my writing done while I help my child with her homework and I get my reading done in the parking lot during field trips. If my life were Orphan Black, I’d be Alison, without the substance abuse. If my life were Buffy the Vampire Slayer, I’d be Joyce. I’ve always said I was Tara, but it’s a lie. I’m clearly Joyce. So although I live a life of great privilege, it’s not surprising that I sometimes long for a little escape – some adventure, something fresh and hip, something like…Life in the Bay Area.

We all idealize cities. Paris is where poets drink café au lait and eat croissants. The entire population of Paris consists of poets who are eating croissants as we speak. New York is full of women in their twenties who worry about clothes and who can’t pay their rent. Also, there are taxis. But the Bay Area – oh, my dear readers, the Bay Area is Where It’s At. Here’s my version of the Bay Area. I know it’s not real, don’t worry. But it’s my version, nonetheless:

Everyone in the Bay Area is either a genius or a poor, misguided soul who thinks he is a genius. Everyone is some kind of artist or some kind of scientist, or both. Literally every single author in the world except me (*sobs*) is at the same party in San Francisco right now, drinking wine and saying sparkling witty things. Even the poets from Paris fly in from time to time.

Everyone in the Bay Area has a day job that is glamorous. They usually work in publishing or for Google or a science start up that is developing faster than light travel. Of course some people work in restaurants but only to finance their artistic careers – spend 4 years as a waiter and you are guaranteed a book deal or a starring role on stage. It’s in your contract when you sign on.

No one in the Bay Area has children. This is the land of arts and sciences. It is not the land of cleaning up the bodily fluids of small loud humanoids. They are present in the daytime of course, at parks and museums, but they are bussed in. Likewise, there are a few park benches around the city at which loving elderly couples sit, holding hands. They are also bussed in for the day, to provide ambiance. You can rent a black Labrador Retriever to play with on the beach but other than that no one has pets, although many people have modern, sleek lots with improbably large aquariums that clean themselves. Supervillans (and there are a few – they live in the Transamerica building) are allowed to own sharks and white cats.

At night, everyone goes to a party or other group event. EVERYONE. It’s mandatory. The nature of the party is optional. It could be a grungy rave, a dinner party, posh cocktails and canapés at a loft, a poetry reading in a basement, or a fight at a bar, but no one is at home eating leftover pizza and watching Oprah, unless they are doing it ironically as part of a living art installation.

Everything in The Bay Area is within a 20-minute radius. No one drives. They teleport. Or take BART, which is always clean and convenient unless it’s being used for a music video about the sordidness of urban life.

In the daytime, the weather is sunny. At night, the skies are clear. At dusk and dawn, there is cinematic fog and it is cool enough to wear trench coats and nifty hats. At regularly scheduled intervals, there is a downpour of rain in which people passionately declare their love for one another and kiss on the sidewalk. It can be inconvenient if you’re just trying to walk down the street, but hey. That’s the price you pay for living in The Bay Area.

That’s my story and I’m sticking to it.

3 thoughts on “The Bay Area: A Suburbanite Dreams of the Big City”