Today is the day that Jane Eyre was first published, back in 1847!  Jane Eyre is one of may favorite books.  I have two copies on my bookshelf, one on my phone, one in my car, and one wrapped in plastic and stored in my earthquake kit (I live in California and we have earthquake kits – it’s a thing).  Jane and I have been fast friends since I was ten and first discovered the book.

Here’s a few things you might not know about the story:

Ready for the best quote?  Here you go:

“Do you think I am an automaton? — a machine without feelings? and can bear to have my morsel of bread snatched from my lips, and my drop of living water dashed from my cup? Do you think, because I am poor, obscure, plain, and little, I am soulless and heartless? You think wrong! — I have as much soul as you — and full as much heart! And if God had gifted me with some beauty and much wealth, I should have made it as hard for you to leave me, as it is now for me to leave you. I am not talking to you now through the medium of custom, conventionalities, nor even of mortal flesh: it is my spirit that addresses your spirit; just as if both had passed through the grave, and we stood at God’s feet, equal — as we are!”

For more cool stuff about Jane Eyre check out my book, Pride, Prejudice, and Popcorn:  TV and Film Adaptations of Pride and Prejudice, Wuthering Heights, and Jane Eyre.  You can find it here: 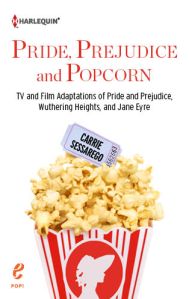