This month on Between the Lines we are discussing The Grapes of Wrath by John Steinbeck.  Leave comments here, or better yet join us at Arden Dimick Library in Sacramento, CA at 2PM on September 28, 2014.

John Steinbeck’s life and writings are deeply tied to California.  Steinbeck was born in Salinas, California, in 1902.  He attended Stanford University on and off for six years before officially dropping out.  After trying to earn a living as a freelance writer in New York City, he came back to California, married Carol Henning, and became a caretaker at Lake Tahoe.  During the Great Depression, he moved to Pacific Grove, where he fished and crabbed and wrote with paper and money provided by his parents. 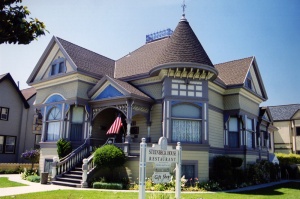 The home in which Steinbeck was raised is now a museum and restaurant.

Steinbeck’s first hit was his fifth book, Tortilla Flat.  This book concerns a group of friends who live in an impoverished  neighborhood on the outskirts of Monterey.  Although the book was a commercial success, Steinbeck felt it was misunderstood, claiming that he did not mean to belittle or patronize his characters.  Steinbeck’s next three novels, In Dubious Battle, Of Mice and Men, and The Grapes of Wrath directly addressed the Great Depression.  His next book, Cannery Row, was a fictionalized description of life in Monterey.  The character “Mary Talbot”, the depressed wife of a struggling writer, is based on Steinbeck’s wife, Carol.  The character “Doc” is based on Steinbeck’s best friend, Ed Ricketts. 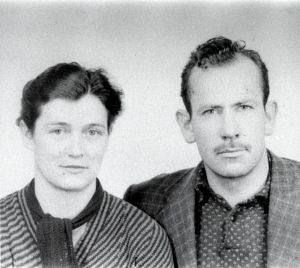 Steinbeck was a war correspondent in WWII.  He travelled through Europe, North Africa, and Italy, writing human interest pieces about the lives of soldiers.You can read more about his service in WWII in this article from San Jose University.  Steinbeck also covered the war in Vietnam.  Despite his life-long leftist leanings, Steinbeck was in favor of the Vietnam War, which two of his sons fought in. 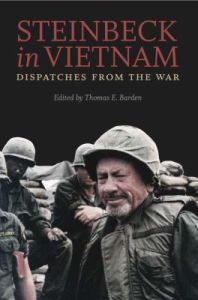 Steinbeck died at the age of 66 in 1968, of heart failure.  He had written 29 books as well as plays and screenplays.  He cited William Faulker and Ernest Hemingway as the authors he most admired.  He is buried at Salinas, California, home of the John Steinbeck Museum.

You can see a short video about Steinbeck’s life on biography.com

One thought on “Between the Lines Book Club: John Steinbeck”