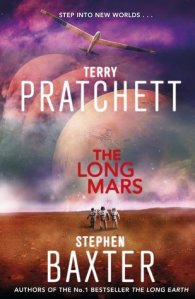 The Long Mars is the third book in the Long Earth series, a series with five planned books (total).  This series has always worked more as a conceptual experiment than as series of novels, and The Long Mars is the most glaring example of this in the series to date.  The concepts remain engaging but the story does not.

In The Long Earth, humans became able to “step” across parallel worlds.  They travelled as individual explorers and as pioneering groups who set up homesteads.  They mined new lands for resources and hid in them for refuge.  The economic, theological, social, and political ramifications of this are explored in The Long War and The Long Mars.

These ramifications are truly fascinating.  Pages and pages are devoted to nothing but descriptions of one world following another as airships step across them.  In The Long Mars, there’s an earth where jellyfish are the dominant life form and another one in which tiny crabs build tiny but elaborate cities in the sand.  There are boring earths consisting of endless fields or grass or algae.  There are worlds that are barren.  The book does a great job of conveying the diversity of the earths, and the combination of wonder and boredom that people experience when the take long journeys across thousands of earths in a year.

The problem with this installment is that, even more than in the past books, the story is too disjointed to make any cohesive or compelling narrative.  I skimmed a lot – and so did the authors, who often start paragraphs with “Four years later…”  The characters are engaging but there’s no time to build a relationship with them because the narrative keeps jumping around.  At this point in the series, they are barely characters at all – they function as plot propellent.  And the idea that living on one of the Long Earths caused the creation of a new human species is far less believable or interesting than the previous books’ depiction of how humans would struggle with this new technology.

The Long Mars isn’t terrible overall.  As a collection of concepts it’s wonderful.  But it was very easy to pick it up and put it down and skim over it.  It’s a great thought experiment but a fractured, disappointing novel.  I’m still looking forward to the next books, though, because I want to see what’s on the next Earth and the next Mars.  The thoughts stay compelling even when the characters and plot don’t.