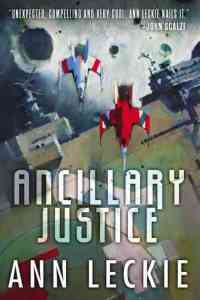 Every where I turn, people are talking about Ancillary Justice.  It’s been nominated for a Nebula Award and a Hugo, and now that I’ve finally read it I can see why.  This book plays with points of view cleverly to tell a complicated story in a deceptively simple way.

Once upon a time there was a vast empire that conquered hundreds of worlds.  With each conquest, the empire took people, wiped their minds, and had artificial intelligences implanted into these bodies.  A starship, such as Justice of Toren, would have an artificial intelligence running the ship and thousands of linked bodies that could be deployed both on and off the ship.

Our story begins with one of the bodies, severed from contact with the ship and with other Ancillaries.  Breq is seeking justice and vengeance upon the leader of the empire.  She struggles with functioning as an individual and with functioning within a variety of alien cultures.  Through a series of flashbacks, we find out what launched Breq on her mission, while in the present Breq navigates political and cultural hurdles on her way to her goal.

Two elements of that struggle are of particular note: her need to deliberately shape her face into facial expressions to convey or conceal emotion, and her struggles with identifying gender in different cultures.  Breq shows no interest in sex, but she is very much interested in getting what she needs from people, and that means using language properly and avoiding offense, and THAT means keeping track of how gender is identified and discussed in different languages.  In Breq’s native language, there is no gender, so in the book, everyone is described as “her” unless Breq has to specify.  This has a fascinating impact on the reader.  In our culture, the “norm”, the baseline, is white male.  In Breq’s world, the baseline is neutral, but as a reader, I read it as female because she uses “she”.  This means that I found myself picturing almost all the characters as female – a truly liberating experience.  It turns out that the concept “women are people” is a lot easier to grasp when all people are identified as women until further notice.

Because Breq can (initially) see many different things at once, she serves multiple roles as a narrator.  She’s an almost omniscient narrator, able to report on many different events at once.  She’s a personal, first person narrator and her character is amazingly relatable.  She spends so much time with another character that the other character, Lieutenant Awn, serves as the soul of the book until Breq is able to fill that function herself.  And due to political schemes, she’s an unreliable narrator.

I love it that even though this is Space Opera, it’s ecumenical.  It’s not 1000 pages long.  It is planned as a trilogy, but not a never-ending series.  It uses simple language but is complex in its discussion of music, gender, religion, culture, colonialism, war, ethics, and friendship.  There have, of course, been other stories about hive minds discovering individuality, and sentient ships, but Ancillary Justice doesn’t feel like anything else.  It feels fresh and new and interesting and emotionally compelling.  There’s been a lot of buzz about this book and it’s all deserved!