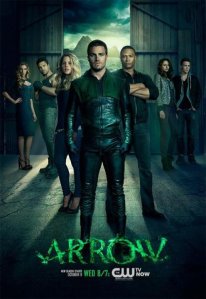 First of all, I’m so sorry I left you all last week.  I’m pleased to say that I did catch the episode I had missed and as a result I keep chirping, “Bitch…with wifi!” at everyone.  Seriously – how am I not wearing this as a T-shirt, all the time?

I’ll be your interrogator today!

So this week’s episode, “Streets of Fire” involved a lot of explosions and fights and great lines and several lines at which I did the whole “fist-pump in the air” thing.  There were audible cheers.  From me, I mean.  Line of the week comes from Laurel:  “That was the Canary”.   Behold my reaction:

OK, I’m a little tense about the finale next week.  Here’s my mantra:  they can’t kill the entire cast.  I’m sure they will kill off someone who is not a villain.  Personally, I’m so sick of Slade and his endless whining that I can’t wait to see him go out.  Please, Arrow producers, do not make me listen to him whining about Shado for another season.  I’m begging you.  And for crying out loud, DO NOT KILL FELICITY.  I am not kidding.  Anyone messes with Felicity, I’m crawling into my TV set and messing up some bad guys myself.  Do not tell me approximately 100 times in 45 mites that Slade is going to kill whoever Ollie loves most and then have him and Felicity being all touchy-feely.  DON’T TOY WITH ME!

I have no highlights.  It was all highlights.  I do need to give a shout-out to this review from io9.  I recommend them often for full recaps and this one goes above and beyond by describing all the things Amanda Waller could do other than bomb this city.  Honorable mention for line of the week comes not from the episode itself but from reviewer Esther Ingliss-Arkell, who says,

But Waller already knows that Slade can be hurt and that he lost an eye. And that makes her decision so dumb that she ceases to be human, and basically becomes an elaborately sculpted cell phone holder. There is nothing between the point of her chin and the crown of her head but teeth and cat litter. She is as dense as a neutron star.

I bow before a master.  That was great.

Spin-off show – Slade and Amanda return to the island because of reasons. After five minutes, they are eaten by sharks. The end. I would watch this.

I know this is brief, but honestly this episode was just one long squee.  Ollie, stop whining.  Laurel, it’s great that you are such a good cheerleader now.  Please stop also trying to be action girl.  Or, since we know from Season One that you are quite well-trained in basic self-defense, do “Action Girl” right.  Summer Glau, you just be you, sweetie.  Rock that catsuit.  Roy, I’ve enjoyed this interlude of you being in a coma.  Thea, if you shot your dad, YAY!  If instead of shooting your dad you shot the bad guy behind him and are running off with your dad to begin your life of villainy, double yay!  Slade, shut up, already.  Diggs, find something cool to do.  I can’t wait until next week when this happens!!!!!! 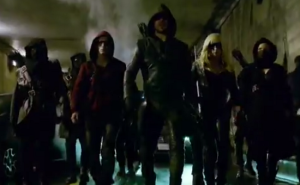 One thought on “This Week’s Arrow: “Streets of Fire””