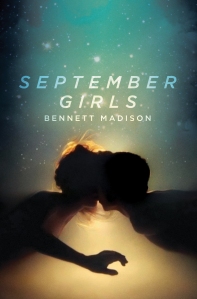 September Girls is a story that immerses the reader in a dream.  The narrator, a teenage boy named Sam, goes to a beach town with his father and older brother for the summer.  This town has a lot of girls, but it also has The Girls.  The Girls all work in the town, as waitresses or in the gift shops or as housekeepers in the hotels.  They are all beautiful and perfectly made-up.  They are all blond.  Sam become involved with one of the girls, Dee Dee, who turns out to be even more mysterious than girls normally are to teenage boys.

This is a story in which everything feels like a dream.  Sometimes the characters are stoned, or drunk, or both,  Sometimes they don’t know if they are dreaming or awake.  Time passes in the town, but it passes slowly, and people come and go with no set date of arrival or departure.  The narrator is crass and self-centered for much of the book, and yet the language is lyrical and lovely yet simple, especially during sections that are narrated by The Girls, like this one:

First we are alone.  First we are naked.  At first, walking is nearly impossible.  It remains difficult.  We have problems with our feet.  They are always aching.  Our shoes often have blood in them.  We are covetous of the Others’ high heels, especially the shiny, patent-leather kind.  We can only wear flats.

First we are alone.  We’re not sure how we find one another, but we do.  Then we are still alone, but in the way sardines are alone.

For much of this book I disliked the narrator and I thought he was shallow and in love with a fantasy (I was right).  But I ended up loving this book, and how as the book draws to a climax it becomes a meditation on what love is, and how we know if we are in it, and why we fall in love.  Sam’s answers might best be summed up as “I don’t know”.  But he changes a great deal during the narrative, and his feelings towards Dee Dee become less about fantasy and more about appreciating her for who she is.  It’s also a story about letting go.  I viewed the ending as a happy ending, but not everyone will.  It’s one of those bittersweet endings, but very satisfying.

September Girls has been nominated for an Andre Norton Award For Young Adult Science Fiction and Fantasy Authors.  This is one of the awards given out during the Nebula Awards Ceremony.  You’ll be seeing a lot of nominees being reviewed here in the next couple of months as I’ll be attending the ceremony and I like to have read as many of the books as possible.  This book was a delight, even though it took me a while to understand why.  It’s a beautiful fairytale, and despite Dee Dee’s warnings about fairy tales, it left me feeling happy and renewed and thoughtful.

One thought on “Book Review: September Girls, by Bennett Madison”