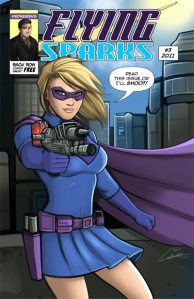 Today we welcome author Jon Del Arroz for a guest interview.  Jon is the author of the webcomic Flying Sparks.  We had a few questions for Jon:

Tell us about your web comic, Flying Sparks!

Flying Sparks as advertised is “the story of a hero and villain in love.”

It started with an idea of “let’s do a comic that really centers around a villain, one that shows his motivations and perspective,” because that would be pretty fresh in terms of material. Well, then I wrote Meta-Girl, since every good villain needs a nemesis, and I liked her so much I couldn’t just do that. The comic actually has become a little more about her, though I try to keep the perspectives and storylines as close to 50/50 between her and Johnny as best I can.

Can you explain a little about your business model?  When creators put their comics online for free, how do they make money?

Online comics don’t make much money, that’s the sad fact. I do have print versions of the comic that I sell at conventions or whatnot that help earn a little bit of the cost back, but it’s mostly about exposure and audience building, which seems to be working thus far. I hope that enough of an audience sees this as a good work that as I delve into other projects (while keeping flying sparks going!).

Will we ever see a paper edition of Flying Sparks?

Already exists! I just haven’t done much work into putting up an online store on the site. Anyone who’s interested can contact me via the Flying Sparks facebook or my email on the site and I’ll happily sell it to you!

Do you have an idea of how FS will end?

Yup, have known the ending from the start of issue 1. It keeps getting pushed out for how many issues it’ll take to get there though, as the characters take over where the story wants to go. I think I was originally planning 6-8 issues, and now it’s looking like it’ll probably be closer to 18. 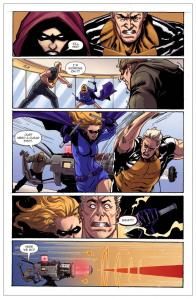 Tell us a little about the romance aspect of the comic.  How did you decide to do something romance-centric?  Do you think your main couple is meant to be together?  Do you picture a happy ending for them?

I thought it was fun is how it came about! Like I mentioned above, it started as a “let’s do a villain-centric” comic, but then I started to think about the absurdity of secret identities as a trope in comics, and the ability or inability to keep those secret identities from good friends, lovers, etc. The next natural progression is to mix the two worlds for conflict purposes. I find my work tends to veer toward romance as well, so it was very natural.

It also came out of a reaction to the Spider-Man “One More Day” and “Brand New Day” arc, as well as the New 52 in DC, where there seems to be a fear of having characters in a stable relationship or really developing characters’ relationships in a realistic manner. The editorials of both companies view marriages of Lois Lane and Superman and Spider-Man and Mary Jane as “mistakes” and cite that “interesting stories can’t be told in those environments.” Which I think is dead wrong! Now Meta-Girl and Johnny aren’t married, and there’s turmoil between them, but I skipped over the “interesting story” part of the pursuit and just dropped the storyline mid-relationship as it grows stronger. I think as a story it’s a fun read even as is, and shows that relationship based stories can work in the comic medium.

Are they meant to be together?

Read on and you’ll find out!

What keeps the main couple together and what drives them apart?

Their passion for each other keeps them together, and they’re both very intelligent and interesting people. One of the main themes is secrets keep them apart.  We’ll see how that progresses as those secrets break down!

What writers and artists most influence you?

1.Anne McCaffrey at #1. I think a lot of my decisions to write to begin with were because of her, and she’s definitely a huge inspiration on the level of “I can do sci-fi concepts yet still pursue a romantic storyline and be successful.”

2.Todd McCaffrey – Cuz he’s been so kind to me and kept pushing me. He’s got some really great concepts in his own right. I highly recommend his solo novel “City of Angels”.

5.Brian Michael Bendis – A great modern comic writer. I try to build those character banter moments similar to his a lot of the time.

6.Erik Larsen – Pacing is everything, and Erik’s Savage Dragon is a beautiful example of keeping a long term storyline going while having self-contained issues.

8.Steve Miller and Sharon Lee- I just discovered this duo recently, but they do the science fiction/romance tandem better than anyone.  Beautiful writing all around from the character work to the world building. 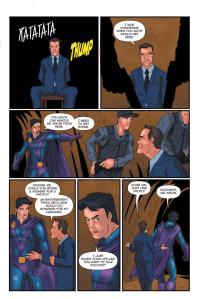 1.Jethro Morales, the Flying Sparks artist. He’s so amazing. I just want him to draw comics for my writing for the rest of my life and beyond!

2.Chris Samnee – Beautiful work on Daredevil and before that on The Mighty Thor. The art is so good and expressive but maintains a classic comic feel.

3.Erik Larsen – Just like above. Panel pacing is equally important to story pacing!

What else are you working on currently?

Always working on Flying Sparks since it’s an ongoing story.  Other than that I’m in the 2nd draft of a romantic space opera novel which I think will definitely appeal to Flying Sparks readers, since it carries similar themes and features two unlikely lovers as protagonists. Also just finished up a draft of a YA Steampunk about a girl who inherits an airship. On the comic front, I’ve started a comic about a vigilante team called Pistol Whipped, we’ll see how that progresses.  Finally, last year I came out with a short story, “The Romance Chip” in the anthology Irony of Survival from Zharmae Press, which you can find on Amazon or B&N.  http://www.amazon.com/Irony-Survival-Zharmae-Anthology-Kavan-ebook/dp/B00EY3OAN2/ref=sr_1_1?ie=UTF8&qid=1390240669&sr=8-1&keywords=irony+of+survival 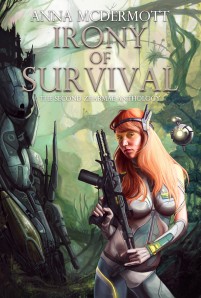