The first part of this episode is boring.  The second part comes out of nowhere and is harrowing and surprising and touching.  If this show could just learn to be like that for a full episode instead of half an episode, it would be phenomenal.

The first half of this episode is about the team trying to figure out how a camp counselor died.  He was a firefighter, and the team discovers that there are other victims of this mysterious cause of death who are also firefighters.  This part is dull. 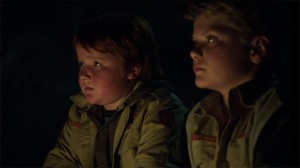 Do we care about the fate of this camping trip? No. not at all.

But then, Coulson determines that a firefighter who was a first responder in New York is infected with a Chitauri virus and is about to die.  And then we do care – because Coulson does, and he stays with the man as long as he can, offering to call his family and telling him that he (Coulson) was dead, and that what he saw when he died was beautiful.

Yeah, I care about this guy, and now I have something in my eye, damn it.

Mystery solved!  Episode over!  No wait – it’s not, because the body of the first victim had been brought onto the plane, and Simmons was infected while examining the body.  She has an estimated two hours to live, they can’t land because they are over the ocean, and her death will cause an electronic surge that will destroy the plane, which is why Jacob from Lost orders Coulson to “jettison the cargo”.

So Simmons is on one side of a quarantine door trying to make a cure for herself.  Fitz is on the other side, trying to help her without being in the lab, until he basically says, “screw quarantine” and just comes in.  Ward and Skye are regulated to the background (finally!) where they are frantic from feeling helpless, and Coulson, supported by May, is trying to stall his superiors and figure out what to do, and I have all the feels.

So without spoiling everything completely, here’s some of the best lines – I say some, because there were a ton of great lines this week.  Coulson has several conversations with May that are vulnerable and scary and sad that I didn’t even try to sum up.  Beautiful writing, beautiful acting.

Agent May, interrogating a camp leader:  “Have a cookie.”

Simmons:  “It’s science, Fitz!  I have to dissect something!”

Coulson, eyeing a locked barn door:  “We could ram it with the truck.”  May kicks the door open.  “Or…”

Coulson:  “Do you have any idea what it’s like dealing with the Moroccan office?”

This episode was strong (once it got going) for several reasons:

See you next week, team.  Try not to die on me in the meantime, OK?