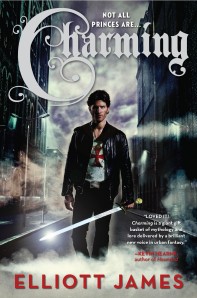 Charming is – well.  It’s charming – sexy, funny, and engaging.  This urban fantasy introduces us to John Charming, who is a former Knight Templar gone rogue.  John is sexy, snarky, smart, a good fighter, and he loves strong, capable, smart women.  For once, you can judge this book by its cover.  If find the cover to be even a bit interesting, then you won’t like this book.  It turns out that I seem to have a teensy little fetish for scruffy guys in leather who stalk misty city streets, holding glowing swords, beneath fairy tale style lettering.  Who knew?  So I thought this book was a blast.

Most of the book involves John trying to fight an especially evil vampire.  In the process, he acquires a team including a valkyrie named Sig (she’s named after the firearm).  This book does a good job of combining humor and emotional weight.  It’s not a romance novel. but the romantic element is strong and well done.  The book leaves on a satisfying note – it’s clear that there will be a sequel but it doesn’t end on a cliffhanger.

This is a trope-heavy book.  I happen to be fond of these tropes:  scruffy rebel snarky guy, tough warrior woman, adorable funny sidekick, building a family from a group of misfits.  This is one of those books that isn’t for everybody, but if the tropes I listed appeal to you, you’ll love the book.

You can find a full-length review (by moi) at Smart Bitches, Trashy Books.

One thought on “Mini Review: Charming, by Elliott James”