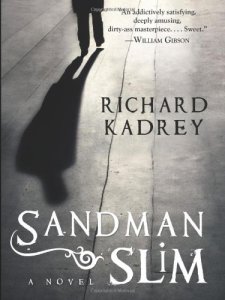 I didn’t expect to like Sandman Slim (the first book in the Sandman Slim Series).  I thought it would be way too dark and violent and nihilist for me.  Turns out, it’s dark and violent (very, very graphically violent) – but it’s also incredibly funny and, dare I say it, pretty darn heart-warming.  Considering that it’s about a guy who escapes from Hell to murder the people who murdered his girlfriend, this comes as a surprise.

The main character, Stark, was part of a group of magicians in Los Angeles.  There was a falling out, and the group had him sent to Hell, where he spent eleven years fighting demons as a gladiator.  When he discovers that his girlfriend back on Earth has been murdered by the same people who sent him to Hell, he escapes, bent on vengeance.  Once he’s back on Earth, he gets pulled into all kinds of violent political struggles between various factions of angels and devils and supernatural beings, but he keeps his sights set (more or less literally) on revenge the whole time.

This book is as noir as noir can be.  You can’t beat it for trashy LA atmosphere.  And it’s cynical – but sort of not.  Oh, people in the book say cynical things constantly.  Incredibly cynical things, such as, “If I learned anything Downtown [Hell] it’s this:  the only real difference between an enemy and a friend is the day of the week.”

But at heart, it’s actually not cynical at all.  Stark projects himself as a loner, but within his first week on Earth he is surrounded by friends that he just can’t get rid of, no matter what day of the week it is – a bartender who feeds him, a video store clerk who wants to learn magic, an old friend/father figure, a crazy magical doctor and the doctor’s supernatural assistant.  Stark is ruthless in combat and makes dire threats that he says he’s ready to carry out, but he seems to have an aversion to just outright murdering someone even though that’s all he talks about.  Everyone he kills he kills in mid-combat (although, a lot of the time, he started the combat).  He also claims to be completely self-serving but he sure winds up saving stuff a lot.  I’d say the message of the book isn’t about how everything sucks, but about how to work through grief, and the importance of community, and finding your own path, even if you decide that your own path is that of being a freelance thief/magician/assassin for hire and you offer your services to both Lucifer and the Archangels in a kind of equal opportunity, annoy everyone scheme.

And if you like that dry, wise cracking wit that pervades noir, you’ll love this book.  It’s hard to find a book with a snarky disembodied head, but this book has one, and despite being severed it has the presence of mind to say, “Kiss my ass.  It’s over there across the room, so I’ll have a good view”.  The humor often takes the form of an unexpected parting line, as in this moment when one of Stark’s allies shows up unexpectedly to help him in a fight:

I’ve never seen a jade in full feral mode before.  Candy’s nails have curved into thick claws.  Her eyes are red slit pupils in a sea of black ice.  Her lips and tongue are as black as her eyes.  Her mouth has a slightly different shape…A mouthful of pretty white shark’s teeth.   She’s the most beautiful thing I’ve seen in eleven years.  I want to have monster babies with her right here and now.

Which leads me to my one gripe – the book and women.  This book has a simply terrible case of Women in Refrigerators Syndrome.  The phrase “women in refrigerators” refers to an influential essay by Gail Simone that points out the disproportionate number of times that women in comics are killed or depowered purely to propel the male protagonist’s journey forward.  In Sandman Slim, everything is about, you guessed it, Sandman Slim (Stark’s nickname in Hell).  But a major motivation for him is that he can’t protect the women that he knows.  His enemies play on this.,  The murder of Alice starts the plot.  Allegra, the clerk who wants to learn magic, seems like a potentially exciting character but she is quickly regulated to making potions in a back room and being kidnapped (and sexually menaced by her kidnapper in front of Stark) as a way for the bad guy to get Stark to act.  At one point, the bad guy’s thugs shoot a woman to death that Stark doesn’t even know, just to piss him off.

Now, Stark himself is sexist in exactly the way you’d expect a nineteen year old boy to be (he goes to Hell at nineteen) but he also demonstrates a huge amount of respect and fondness for women who are mentally and/or physically tough (and different kinds of strength are represented in both male and female character, which I liked – some characters are physically powerful, others are brave and smart, some are both).  So for part of the book, I was actually pretty excited about the female characters.  But they are never able to defend themselves effectively and they end up serving as plot devices as victims (although they may have more development in the sequels).  The exception is Candy, who totally kick ass in a fight, but at the end of her one designated battle scene she’s too wounded to go further and by the end of the book she has been neatly regulated to the background again.  To be fair, pretty much everyone ends up in the background, because Stark is the Main Character, and he’s physically and magically superior to everyone because of Plot Twists and Background Story.  But the incessant theme of women not being able to protect themselves got real old, real fast.

Bottom line:  If you like noir, you’ll like this.  If you are squeamish about the following:  violence, sacrilege, or cursing, then you won’t.  I liked it much more than I expected to because of the well-written central character and the humor, but I hope the sequels treat women better, because Jeez that was rough going in some spots.  Whether I’m officially offended or not depends on how much the characters are able to develop in future books – Allegra shows tons of potential to be an interesting, rounded character if they let her, and I’d sure like to see more of Candy, whether she’s kicking ass or serving as a counterpart to Stark in terms of choices about violence.  If those characters get to develop and be more than victims, then I’d have no reservations about recommending the series to fans of noir and horror.  If the rest of the series consists of random women getting shot on the street, or supporting characters being tied up and molested, than yeah – I’m gonna go with offended.