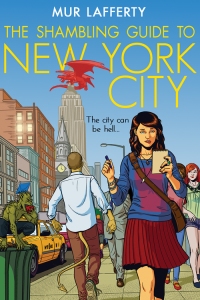 In The Shambling Guide to New York City, Mur Lafferty upends urban fantasy by being completely matter of fact about it.  Her main character, Zoe, accepts a job at a publishing firm that makes books for monsters – the politically correct term is coterie.  Zoe has to fend of the advances of the office incubus, decide whether or not wearing perfume to a meeting with vampires would be a good move (it might make her smell less like lunch) or a bad move (it might offend their sensitive senses of smell).  She learns to take coterie taxi’s and pay for thing with Hell Notes and cope with the fact that there are human brains in the office fridge.  Above all, Zoe never stops using her publisher’s brain – even during her first, shocking exposure to the coterie world, part of her is wondering what might publish well with this demographic.

I loved this book right up until all the plot madness kicked in and frankly, I lost track of what was going on.  Eventually Zoe has to go out and fight evil, but I preferred just watching her buy coffee.  There was a golem made out of a plane, and lot’s of explosions, and you, know, action type stuff happened, but that was all pretty confusing.  The strongest stuff of this book is definitely its matter-of-fact, funny, and at times horrifying look at what it would be like to work in an office full of monsters.  For instance, here’s one of Zoe’s coworker’s to-do lists:

Meet With Zoe regarding writing assignments

Report back to Phil, Montel, or Zoe

And no matter what kind of horrible carnage is happening, Zoe’s boss still expects her to keep to her deadlines.  Hence my new favorite office sign:

Come back tomorrow, and I’ll be happy to cope with anything.  For today, I have to do my job.

I thought this book was hilarious, but it was also not for the faint of heart.  Innocent people get eaten and coterie think very, very differently than humans, even those coterie that Zoe thinks of as friends.  There’s a scene of sexuality that involves what might best be described as attempted mental rape.  This book takes on a whole range of possible consequences of working with coterie, from the cute (the water sprite can flow under the office door and bother you even when you locked the door) to the horrific (when zombies run out of brains, bad things happen).

I loved this book even when it horrified me or grossed me out – I was rather impressed that the author kept the humor without shying away from the bad stuff.  I was less impressed by the chaotic ending – I still don’t know what happened, to be honest.  But I’m very much looking forward to the Shambling Guide to New Orleans.  Incidentally, humans who work with coterie can wear talismans of protection and guess what!  You can get your own!  Aren’t these pretty?  There goes my disposable income *sigh*: 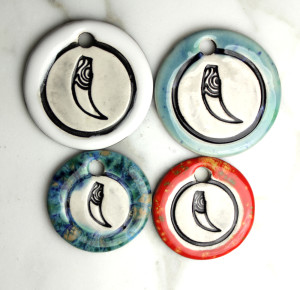 You can order these from surly-amics.  Practical and pretty – my favorite kind of thing!