Welcome to the first of my Nebula Review Series.   I’ll be attending the Nebula Awards in May, and am reading the books that have been nominated for best novel in preparation.  This year has a nice mix of science fiction and fantasy and male and female authors, and a surprisingly high romance content in the books, which I just love, of course.

Throne of the Crescent Moon is a fantasy novel beloved by everybody.  It’s been nominated for both a Nebula Award and a Hugo Award and is getting great reviews everywhere, and I can see why.  It’s a story with a vibrant fascinating setting and interesting characters.  However, I was frustrated by the pacing, which is oddly slow considering the plot elements.

Throne revolves around Adoulla, an aging ghul hunter who is feeling his years, and his assistant Raseed, a young man who is beginning to question the black and white morality of his Dervish training.  Adoulla and Raseed partner with a shape-shifting woman who seeks to avenge her tribe, and a magician and his wife, in an effort to defeat a sinister and darkly magical foe.  Along the way they become caught up in the political maneuverings of the Falcon Prince, who is trying to overthrow the corrupt and cruel Khalif of the Crescent Moon Kingdoms.

There are so many things to love about this book.  For starters there’s the setting.  It is a gorgeously rendered world straight out of The Arabian Nights.  The city of Dhamsawaat is huge, chaotic, and marvelously rendered – in the sense that it’s described with great technical skill, and in the sense that it’s full of marvels.  The smells and sounds and tastes and traffic jams and gardens all seem so exotic and so real at the same time.  You can see why some of the characters love it passionately and other find it exhausting.

Speaking of characters, they are the real high point of the book.  All of them go through profound and believable changes.  All of them are struggling with different life stages.  I loved that some characters were dealing with the realities of aging while other were dealing with the realities of young adulthood. Every character was a person, not a type.  They are funny, they are annoying, and they are moving.  Although it’s not a romance, there is a lot of romance going on, and I liked it that the love stories that involved older people were just as compelling, if not more so, than that between the cute twenty-somethings.

I did get very impatient with the pacing.  Maybe I was just having a weird week when I read this, or maybe I’ve been damaged by reading too many science fiction novellas in which people meet, have sex, save the world, have sex again, and declare eternal love for one another, usually in that order, in about 30,000 words.  But I have to say that considering the massive amount of carnage contained in these pages, there sure is a lot of chitchat in between battles.  Rasheed and Zamia are constantly saying things to the effect of, “The heck with all this research, let’s go kill something!” and eventually I started to agree with them.  I found this book easy to put down, even when I was only a few chapters from the end.

Throne is the first book in a planned trilogy, and probably that’s why so much of it felt like set-up.  It ended well, on an emotionally satisfying note, with plenty to write about in the future but a resolved enough conclusion to enjoy as a stand-alone.  I certainly recommend it to fantasy fans, but be prepared for a startling amount of both gore and conversation. 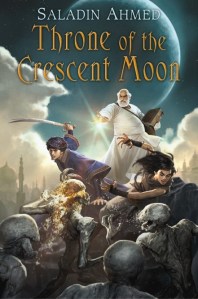 One thought on “Review: Throne of the Crescent Moon, by Saladin Ahmed”